This exhibition imagines our future...and how artificial intelligence might see things differently

You're looking at the world's first AI-made sculpture — and artist Mat Chivers is using it to explore how we process the world around us.

You're looking at the world's first AI-made sculpture

At Migrations, the new exhibition by English sculptor Mat Chivers, there's a huge piece that dominates the space. It looks sort of like a lumpy figure sitting slouched on the ground. But that's not what it actually is — its real reason for being is far more complicated (and a little bit terrifying).

Working with the team at Musée d'art de Joliette who produced the show, as well as with Canadian students and Element AI, Chivers showed an artificial intelligence a multitude of pieces of clay squeezed by human hands. Then, he asked for the AI's response. What it spat out was the world's first AI-made sculpture formed partly from impactite, a type of rock created by a meteor striking Québec hundreds of thousands of years ago. (And if you're me, it might remind you of the moment the obelisk appears at the beginning of 2001: A Space Odyssey.) 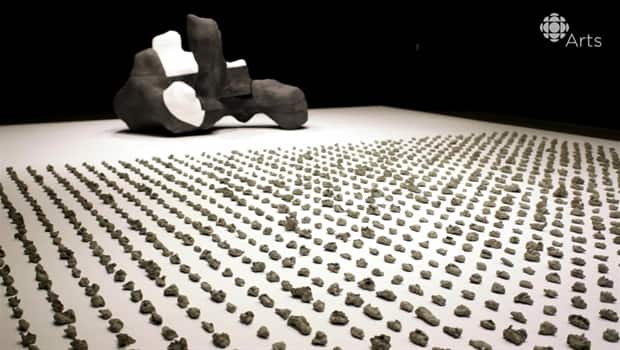 The work of Mat Chivers

2 years ago
3:27
Working with a Canadian AI studio, English sculptor Mat Chivers created this installation about artificial intelligence and how we process the world. Filmmaker: Ariane Lorrain. 3:27

This is clearly not clay squeezed by hands of a human but something far larger, with strange fingers that are difficult to understand, at a scale that would dwarf us. Chivers says, "What comes out the end isn't just an average of the data — it's a new interpretation. The comparison with thinking and imagination is unavoidable. Does the fact that an AI imagined the form of the work raise questions of authorship and, as a consequence, sentience?"

The rest of Migrations, as you'll see in this video by filmmaker Ariane Lorrain, is no less dense, but it all opens up conversation about how we think, draw, see, touch and make meaning. And the exhibition also presents us with a wondering about the image artificial intelligence may have on all of the above.

Chivers says, rather optimistically, "Maybe what's most interesting about this moment of unprecedented technological change, an evolutionary shift, is the potential that offers us to consider what it is about being human that we value, alluding to how we may be moving into a new way of being in the world because of the technologies that we are creating."