This artist living with Down syndrome co-created a new King Arthur play, and here's why that rules

Niall McNeil has brought his vision to life alongside an integrated cast and crew — and it makes for a King Arthur's Night production unlike any we've ever seen. 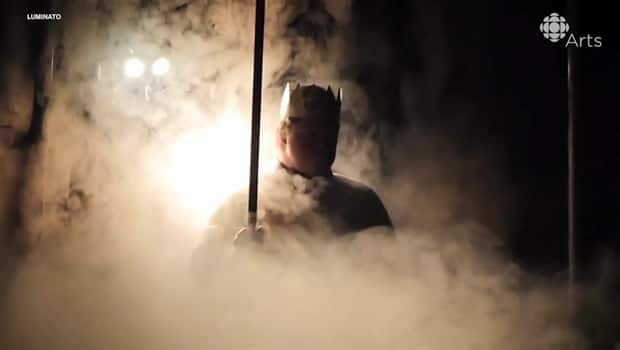 This artist living with Down syndrome co-created a new King Arthur play, and here's why that rules

4 years ago
3:05
CBC Arts visits Marcus Youssef and Niall McNeil during King Arthur rehearsals to hear about how they built this play and what it means to them. 3:05

For the next few nights at Luminato, there's an epic fog-filled version of King Arthur's Night on stage at Toronto's Berkeley Street Theatre. But what makes this production different from other King Arthur plays?

For one, it was co-created by Marcus Youssef, James Long and Niall McNeil alongside songstress Veda Hille. McNeil has Down syndrome, and he and co-writer Youssef found a way to work that highlights McNeil's creative mind and vision — and brings to life his own unique version of the play.

The cast is just as mixed: McNeil, who plays King Arthur, and Youssef, who plays Merlin, act alongside some actors who have Down syndrome and others who don't. McNeil and Youssef are rightly proud of the integrated team they've built, and the incorporation of everybody's particular talents and perspectives makes for a King Arthur's Night we've never seen before.

In this video, we visit Youssef and McNeil during rehearsals to hear about how they built this play and what it means to them. For Youssef, the production is a testament to the power of working together: "There are enormous benefits to all of us. This isn't a favour anybody's doing anybody — this is about making the whole thing better."

See King Arthur's Night until June 18 at the Berkeley Street Theatre in Toronto as part of Luminato, then June 24-26 at the National Arts Centre in Ottawa as part of Canada Scene.