Boyle's Cephalophoric Saint print has a lot built in — ideas about artist's studios, a masculinized history of conceptual art and a competition between two art powerhouses.

Eight Canadian artists have returned to the famed lithography workshop at Nova Scotia College of Art and Design, to work with a master and create some fresh prints. Print's Not Dead follows these artists through the process — how they're making their works and the thinking that informed them.

Shary Boyle is perhaps best known as a sculptor. She makes works that range from the tiny to the intimidating, all marked by a sort of scary level of intimacy. They're also super smart. And she's brought the same energy to the lithograph she created for the lithography workshop at the Nova Scotia College of Art and Design. The workshop itself is a place with serious art world legacy — it was the home to many heavyhitters of the conceptual art world in the 1970s.

When Boyle came back to the workshop as part of a revival initiated by NSCAD in 2017, she decided to play off this history in making her own print. First, she thought about the space she was working in. Artist's studios, as the place where they come up with their ideas and make their work, are complicated rooms. Boyle imagined herself invading a very famous studio — that of Francis Bacon, a notorious (and celebrated) British painter working mid-20th century. Boyle says, "He is an artist that's a phenomenal painter and a phenomenal artist but may not have been the best person, especially when it came to his ideas about women. So I thought that was really important to situate a very female experience from my own life, or my own mind, in that space to try to really counteract it." 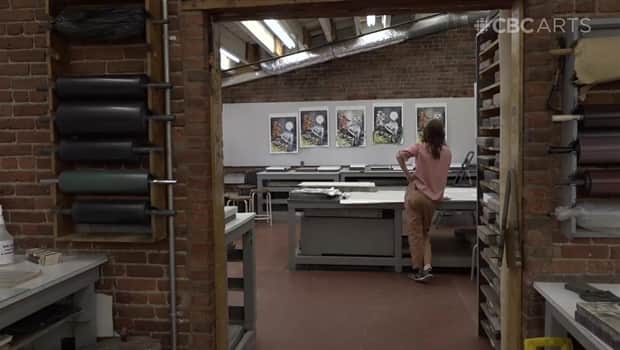 That wasn't the only way Boyle subverted masculinity in her print that references headless Cephalophoric saints. She also called up the history of the workshop itself as a male-dominated space. And she talks specifically about a sort of power play between Joyce Wieland, a female artist who created one of NSCAD's most famous prints, and Vito Acconci, the male artist who immediately tried to displace her.

She explains, "It's hard not to kind of feel a little bit like that there was some competition and kind of a very quick move to lay that stamp over top of that mark to make sure that that mark didn't have its own place in history." Laying one story atop the other, she notes, "There is a mischievous part of me that wanted to kind of take such a sacred image like the studio of Francis Bacon and lay my kiss mark on top of it."

In this video made by filmmaker Marcia Connolly, you'll get a tour through Shary Boyle's process — and her thought process — as she creates her print Cephalophoric Saint. This is part of a new CBC Arts series called Print's Not Dead documenting eight artists working in NSCAD's lithography workshop in the present day — stay tuned for more to come. You can see the exhibition of these artists' works at NSCAD Lithography Workshop: Contemporary Editions, on view at the Art Gallery of Nova Scotia until April 26, 2020.

Find out more about the NSCAD Lithography Workshop and explore the works that have come out of it since 1969 here. And you can follow Shary Boyle here. See more of her work as part of the International Ceramic Art Fair at the Gardiner Museum in Toronto, November 22-24.