Look closer, and you'll see that the elements of the artist's seemingly abstract paintings are tiny stitches in the style of traditional porcupine quillwork.

When people first see Jordan Bennett's paintings, he says, "They think that they're these contemporary artworks...like that's how they exist and that's all they are." But if you look closer at Bennett's murals hung recently in Winnipeg as part of the Insurgence/Resurgence exhibit, you'll find huge versions of tiny stitches that were, historically, the product of porcupine quillwork by Mi'kmaq artists. 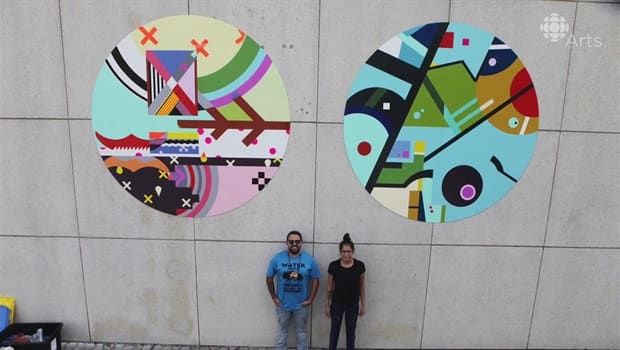 The murals of Jordan Bennett

2 years ago
3:57
"The work that I'm trying to do is a way of continuing and also a way of paying homage and honour to the artists and artisans who came before who allowed these forms to exist in the world." 3:57

Bennett works in all kinds of media — painting, sculpture, performance — but what all his artworks hold in common is this strong focus on history, and the intricate forms of art made by the artisans that came before him.

In this video, Bennett takes you to DesBrisay Museum in Dartmouth, N.S., where he's stunned to encounter a work from the 19th century. Even though he spends so much time looking at quillwork from history, he says, "Seeing this is kind of like seeing a painting that you've loved your entire life, but then you see it in person and it just kind of rattles your skull a little bit."

For the murals whose reproductions hang on the outer wall of the Winnipeg Art Gallery, Bennett collaborated with fellow Insurgence/Resurgence artist Dee Barsy. And inside, he's also part of a tattoo shop set up as part of the exhibition, created by Earthline Tattoo Collective.

You can see both of Jordan Bennett's contributions to the exhibition until April 22.

This video is a part of a series profiling artists from the Insurgence/Resurgence exhibit in collaboration with CBC Arts and CBC Indigenous. Check out the other videos here.​

Alex Mitchell is a filmmaker, writer and musician from St. Margarets Bay, Nova Scotia. With a background in communications and development, over the last decade he has worked with a collection of film and live event production companies throughout Eastern Canada.