The Spanish artist's vibrant work perfectly represents his belief that art and cities must be for everyone.

You can see his murals all around the world — Taiwan, Morocco, Russia, India, South Africa — and now the internationally renowned Spanish street artist known as Okuda has completed three pieces across Canada in Vancouver, Toronto and most recently Edmonton.

We caught up with Okuda San Miguel in the midst of leaving his indelible mark on the city of Toronto. After two years of planning, one month of painting by local artists, 10 days with the artist himself, 960 cans of paint and 140 gallons of latex, Okuda's 23-storey mural "Equilibrium" went up at the intersection of Carleton and Jarvis. 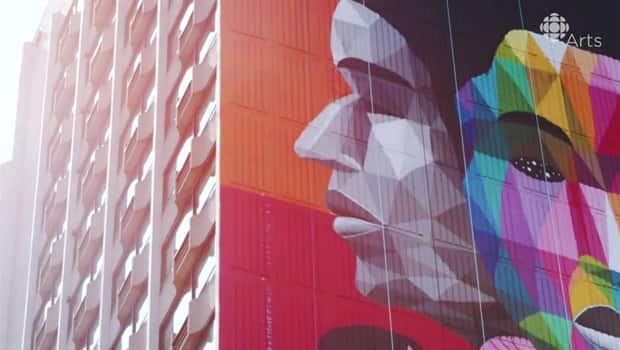 3 years agoVideo
3:30
See Spanish street artist paint a colossal mural on the side of a building in downtown Toronto. 3:30

The project was a collaboration between The STEPS Initiative, StreetARToronto and Knightstone Capital's Parkside Student Residence. While it's not the tallest mural in Toronto — that honour actually goes to another STEPS mural produced in 2013 at 200 Wellesley St. E. — it is Okuda's tallest mural to date.

Okuda believes that modern cities need to promote inclusivity, which is why amongst the complex geometry, colour blocking and cosmic surrealist patterns signature to his work, a message of equality is sewn throughout each piece through the colours of the rainbow flag.

Stephanie Bellefleur, an emerging artist and arts administrator on the project, believes that "showing people that we can use these colours to bring everyone and unite everyone within a rainbow is really key."

The project also engaged a number of local artists including Adrian Hayles, Stephanie Bellefleur and Kayla Buium who facilitated the underpainting, along with additional painting support and documentation by Sharon Mendonca and Shaq Hosein.

It was a relatively short trip for Okuda — and as he hops onto a plane headed for the next city to house one of his large scale colourful pieces, his symbols may be abstract, but his intentions remain clear.

"I like to come to a place, change the environment and leave a piece of my heart."

Check out more of Okuda's work on display right now at #Hashtag Gallery in Toronto and a few of his murals from around the world below: