From turntables to vintage dictaphones, Kid Koala is teaching you how to scratch in four ways

CBC Arts correspondent Derek Kwan stops by Kid Koala's studio in Montreal to get a lesson in how to make music with some unconventional hardware. 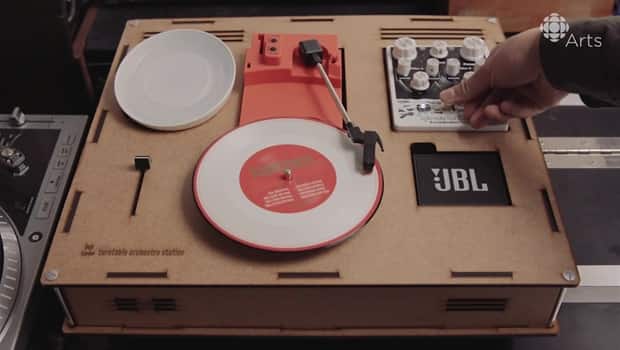 From turntables to vintage dictaphones, Kid Koala is teaching you how to scratch in four ways

4 years ago
1:56
Kid Koala and CBC Arts correspondent Derek Kwan headed into the turntable artist's magical studio to learn how you can scratch with some vintage machines. 1:56

After working one of the turntable stations at Kid Koala's participatory Music to Draw to: Satelite tour, CBC Arts correspondent Derek Kwan followed the turntable artist to his Montreal studio. There, Kid Koala led a lesson in how to scratch four ways — not just on a turntable but on the various gadgets he keeps around, including a magnetic card reader and a dictaphone.

We're now convinced Kid Koala can make music out of pretty much anything. And in this video, you can try and emulate him.

See Kid Koala's Nufonia Must Fall in New Orleans April 14 and 15, Abu Dhabi on May 11 and 12, or San Francisco on August 10-13, and stay tuned here for future tour dates of all his many projects.

Derek Kwan is an actor and filmmaker based in Vancouver, BC. From eating fast food all over the world on YouTube to sharing his experiences through documentary film, Derek's passion is creative storytelling. His upcoming projects include a video series commemorating Canada 150 also with CBC.