For abstract artist Kirsten Hatfield, bipolar disorder gives her the intensity to create

The Vancouver artist opens up about bipolar disorder, growing up with the internet and how online culture is giving marginalized artists agency.

'Art has always been at the core, for me, a sort of coping mechanism'

Kirsten Hatfield is an abstract artist who lives with bipolar disorder. She has faced anxiety and depression since she was a child, but art was always a tool she could rely on. And she began to use her condition as an advantage in making art.

She explains, "Sometimes it can be a struggle for sure, but I definitely wouldn't trade being bipolar because I feel things more intensely than other people do. And it also means that when I work on something — anything — I do it with a lot of intensity and passion." That level of energy means Hatfield is sometimes working on seven paintings at a time, not leaving the studio for days. 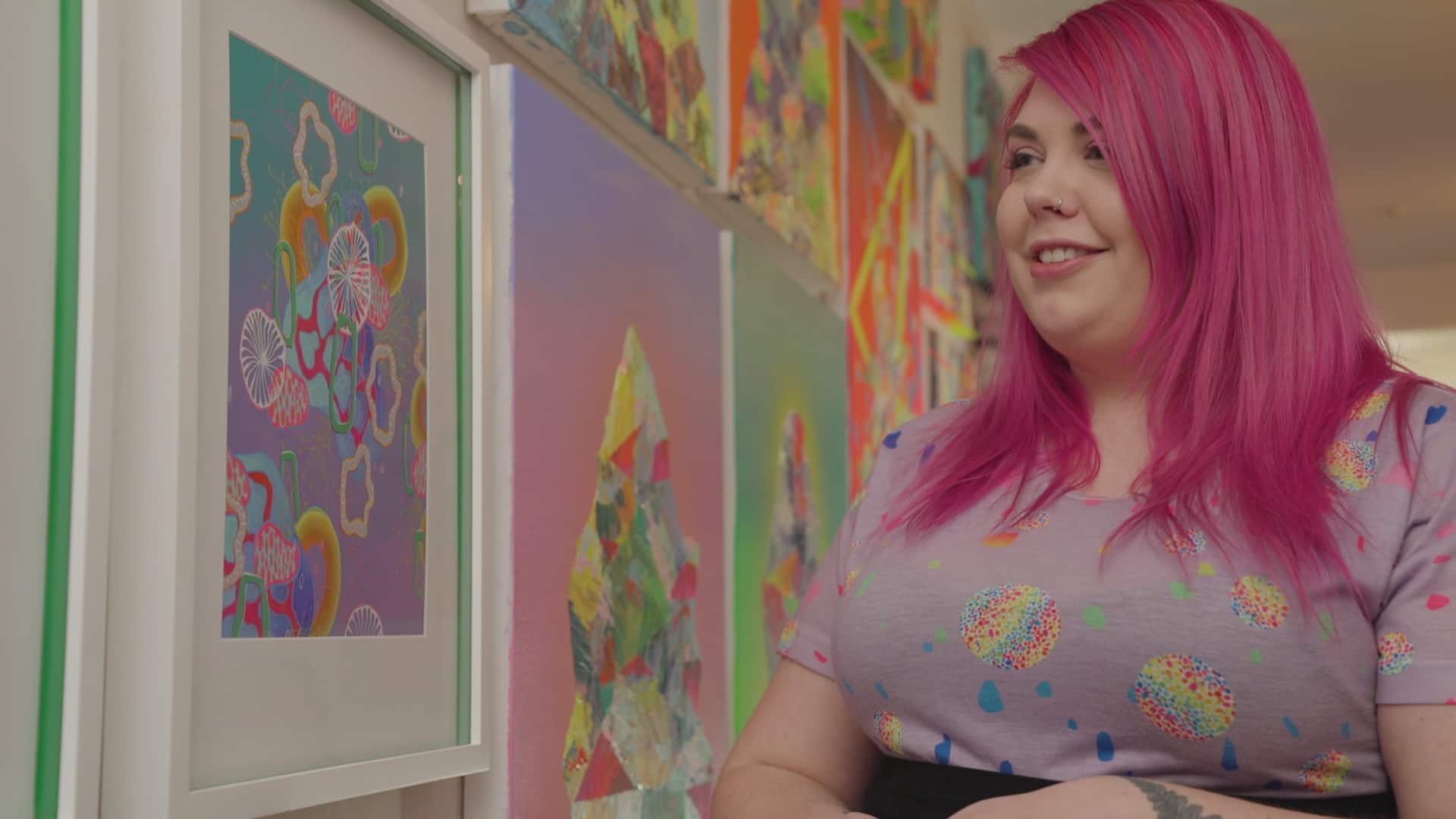 As you'll see in this video, emotion suffuses Hatfield's colour palette. But she has another major influence, also present in her life for years: the internet. Her colours reference, as she cites, "90's cartoons, Angelfire sites and the internet aesthetics of the early '90s and early 2000s," while her flashing collages, paintings, zines and clothing designs also show influence from nature and science fiction. As a person firmly anchored by this multi-faceted post-internet society, Hatfield feels that she's part of a turning point in the history of art — that is, artists using digital technology to express themselves. Hatfield sees the internet as a sort of equalizer, making art more accessible to a public made up of all classes, genders and cultures. And as a feminist, she believes that a digital art platform can raise more female voices, as well as those from other marginalized communities.

With her bright flourescent paintings, Hatfield wants to bring positive energy and cheerful sentiments to the public, especially those facing challenging mental issues.

Note: a few weeks after filming this piece, Hatfield faced septic shock and multiple organ failure from a kidney stone that almost took her life and forced doctors to induce a coma. After she woke up, her medical team told her she'd be in the hospital for weeks — but true to form, though, Hatfield was back on her feet and ready to leave after only a few days. What kept her going? Hatfield said it was her passion for art. She shared with me that she had to get up and be creative again — since she can't be painting for hours during her recovery, she's turned to digital painting to express herself.

See Kirsten Hatfield at Unibrow Arts Fest in Vancouver, August 22-26. In September, she's part of "Maternal Landscape: an intergenerational exploration" made up of paintings by Hatfield, her mother and grandmother, at Gallery Allgard in Qualicum, B.C. And she'll be at the Vancouver Art Book Fair in October.

Camille Vernet is the creator and director of Inspired British Columbia. She has worked in New Zealand, Australia and Canada on TV shows, documentaries and short films. Camille focuses on telling compelling stories that will have a direct impact on people’s lives. With a creative twist, she engages the viewer by shedding light on the human side of every project in which she engages.