For a group of Vancouver artists, this collaborative mural shattered their fortress of solitude

Creating art can be a lonely process — which is why working together meant so much to the artists who make up the collective Phantoms in the Front Yard.

"It is a very, very intense and isolating experience to be an artist," says curator Pennylane Shen. And that's part of why the collective she's a part of, Phantoms in the Front Yard, is so important to the artists who all play roles in it. This year, the seven figurative painters had only 24 days to create a huge mural on an industrial building as part of the Vancouver Mural Festival.

Jay Senetchko, one of the collective's artists whom you'll meet in this video, spends a lot of his time painting in his studio. He's become known for his figurative works — dramatic vignettes that tell stories of history, progress and the tumult of both. In this video, you see him shake off the isolation of a private studio space and take to the streets as he works on the mural alongside the other Phantoms artists. 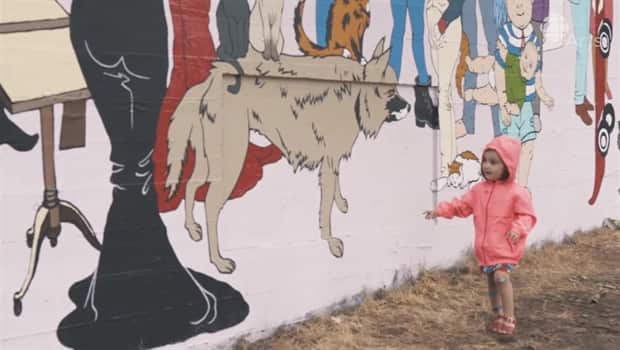 Phantoms in the Front Yard at Vancouver Mural Festival

2 years agoVideo
4:15
Jay Senetchko, one of the artists behind collective Phantoms in the Front Yard, takes his work from the studio into the street for this huge public painting. Filmmakers: Francisco Fuentes and Marisa Brignole 4:15

The Vancouver Mural Festival is a week-long showcase of art, discussion, parties and concerts, started by David Vertesi. Part of the reason he started VMF is that while the city has a large community of artists, there are few opportunities for them to publicly display their art. For artists who work in the studio and show their work mainly in galleries, a mural in this festival gives them the chance to show their work to more people.

For this year's festival, the Phantoms collective collaborated on a mural called "Strange Bedfellows." While the artists have worked together for eight years, this painting marks the first time they've ever worked together on a single composition. The mural depicts an imagined art gallery, exhibiting work from a fictitious Phantoms in the Front Yard art show — and it's managing to bring the painters and the community together.

Francisco Fuentes's love for art started at an early age with a Fisher Price sound recorder and an old Sony Handycam. Later on, he studied Film Production at the Vancouver Film School, which led him to film and direct music videos and short films. He has also been a Director of Photography for documentaries and an indie feature film. Fuentes's mission is to make a positive and permanent change in society, and he's chosen visual media to achieve this. Marisa Brignole is a multi-disciplinary artist. She attended the Vancouver Film School and graduated as a Digital Designer. She has worked as a character animator, graphic designer and motion graphics designer at a tech company in Vancouver. Brignole is currently working as an editor on various video productions.