"The first time I read an Indigenous comic book, I felt empowered."

'The first time I read an Indigenous comic book, I felt empowered'

Cole Pauls is a Tahltan First Nation comic artist, printmaker and illustrator, now in Vancouver but originally from Haines Junction, Yukon. And he's exploring two major parts of his life in his two comic series.

The first, Pizza Punks, is pretty self-explanatory. (Pauls says, "The more pizza I ate, the more ideas I thought of. The more punk music I listened to, the more I wanted to incorporate that into it. It's kind of just a snowball effect.") The second, Dakwäkãda Warriors, follows two Indigenous superheroes who are busy saving the world from evil of various forms. One of their secret weapons? Language revitalization. 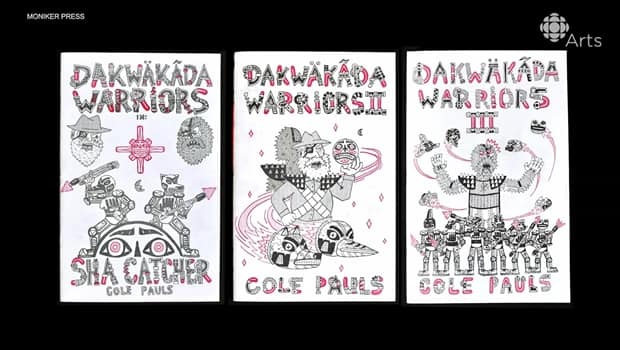 2 years ago
4:13
Tahltan comic artist Cole Pauls has been inspired by punk music, pizza and carrying the legacy of Southern Tutchone language through his comic art. Filmmaker: Camille Vernet 4:13

In this video, you'll meet Pauls in the studio as he works on some drawings and tells you about why it's meant so much to him to include Southern Tutchone language in his comics (there's a glossary in the back, so you get to pick up some vocabulary as you go). To make it happen, Pauls got help from Vivian Smith, who has taught him Souther Tutchoneto since he was in kindergarten. He also got support from the elders in his community, who shared their stories with him. He says, "Because I've spent so many years learning it, I felt the responsibility to incorporate it into my work. Because my dad never got to do that; my grandmother never got to do that."

You're also about to get a heads up on Pizza Punks: The Movie (we're already pre-buying tickets). And it's another way that Pauls is shining light on his culture and encouraging young Yukoners to be proud to belong to their community.

Camille Vernet is the creator and director of Inspired British Columbia. She has worked in New Zealand, Australia and Canada on TV shows, documentaries and short films. Camille focuses on telling compelling stories that will have a direct impact on people’s lives. With a creative twist, she engages the viewer by shedding light on the human side of every project in which she engages.