Aquamen: Meet the orthopedic surgeon who moonlights as an underwater photographer

Taking photos makes Lucas Murnaghan a better doctor, and he's blowing up on Instagram too.

Taking photos makes Lucas Murnaghan a better doctor, and he's blowing up on Instagram too 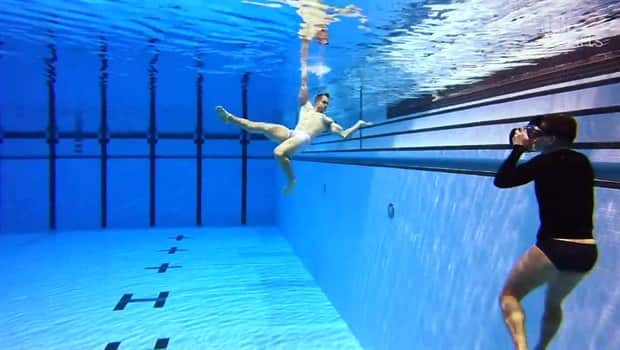 Aquamen: Meet the orthopedic surgeon who moonlights as an underwater photographer

3 years ago
4:24
Taking photos makes Lucas Murnaghan a better doctor, and he’s blowing up on Instagram too. 4:24

Doctors might have one of the most stressful jobs in the world — every decision that they make at work could be life-altering for another human. With stress and burnout being a very real concern for physicians, Toronto-based orthopedic surgeon Dr. Lucas Murnaghan discovered a way to cope: underwater photography.

But his pictures aren't your typical snorkeling shots. With predominantly athletic male subjects in his creative photographs — including dancers, swimmers and divers — Murnaghan has created an underwater world of muscular men who seemingly float and pose weightlessly under the surface.

The themes of his photographs run from fun pop culture references to sensuality to serious and thoughtful moments, and they've gained the doctor a loyal following on social media with well over 100,000 followers on his Instagram account. But for Murnaghan, who describes himself as a "classic water baby," much of the satisfaction comes from the creative process itself and reconnecting with feelings from his childhood.

When I move underwater all of the distractions, all of the demands, all the stresses of the world fade away for maybe as little as 30 seconds, maybe a minute — but it's that moment of peace that allows that clarity in order to create.- Dr. Lucas Munaghan

"Going back to when I was a kid, I can remember that feeling of being underwater and imagining different worlds," he says. "It was a place where I really felt an incredible sense of calm and quiet."

In this video, tag along on a pool shoot with Murnaghan to get an inside look at his process — and to find out how taking photos makes him a better doctor.

Watch CBC Arts: Exhibitionists online or on Friday nights at 12:30am (1am NT) and Sundays at 3:30pm (4pm NT) on CBC Television.