Composer Tim Brady and conductor Gregory Oh show us around the workings of this performance with nearly 100 musicians and a strong sense of community.

Tim Brady is already well-known for his experimental compositions, and his recent performance at Toronto's Luminato Festival is no exception. He recruited almost 100 guitar players — a mix of pro and amateur — and separated them into three distinct groups, each with its own composer, for the "Instruments of Happiness" event. The objective? To simultaneously play the piece While 100 Guitars Gently Weep: Concerto for George. (The George in question, in case you didn't catch the reference, is George Harrison of The Beatles — one of the most revered figures in guitar history.) 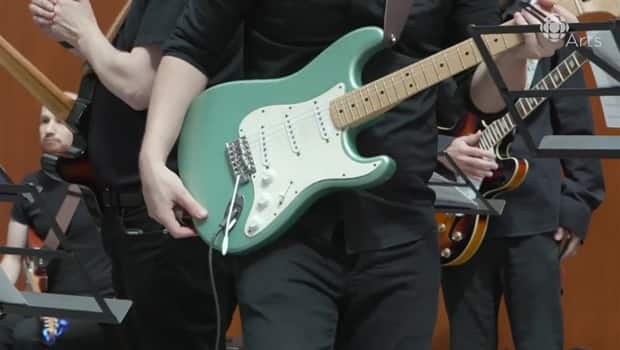 2 years ago
3:53
What it's like inside the almost-100-guitar performance at this year's Luminato Festival. 3:53

How do you make this kind of performance come together? In this video, you'll get a view from the inside as conductor Gregory Oh leads his team through the ad libs and strict timing that all form part of the epic concerto. Musicians like Amanda Lewis are led second-by-second through the performance that has moments of quiet, some crushing crescendos and a solo by frontman Brady.

Brady loves this kind of composition for its sense of togetherness. As he explains: "It builds this sense of community and trust and so there's no real hierarchy — everybody's in working together, just trying to build the best-sounding guitar performance we can."

Find out more about what he has coming up next here.