When Pacita Labayen Aliermo was in her early 80s, she began feeling alienated. She found herself disappointed with how society seemed to neglect its elderly populations, making them feel useless and unable to contribute anything of value. So she turned to two things to give her comfort: her religion and her art.

Aliermo had painted as a hobby her entire life, but the practice had gotten more unwieldy as she got older. Instead, she began to create collages out of the flyers that arrived in her mailbox every day (what some people might call "junk mail"). She'd cut into the ads and across the newsprint to create large block letters. Together, they spelled out, "Jesus Loves You." Every collage was different — the letters might be made from pictures of hamburgers, flowers, discount grocery store sale notices — but the message remained the same every time. 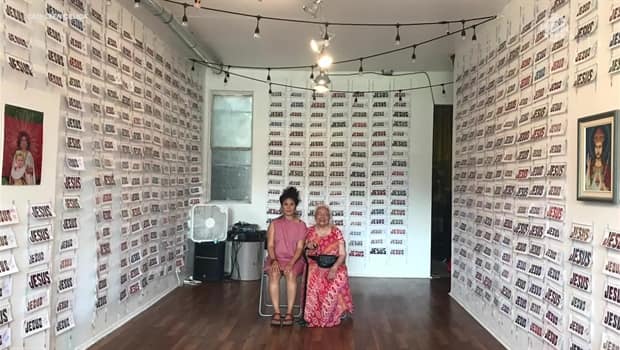 3 years agoVideo
3:41
Instead of throwing them in the garbage Pacita Aliermo, takes her daily flyers and junk mail and turns them into beautiful religious art. 3:41

The artist took her collages to church with her and left them by the holy water for people to take with them when they left mass. She says, "People can be having a bad day and then look at the picture and feel loved." And in this way, her art gave her solace.

Now, Aliermo's granddaughter (and a fellow artist) April has showcased her work. For the exhibition "Pacita's Love" that was at 187 Collective, April mounted over 800 of her grandmother's "Jesus Loves You" artworks using more than 10,000 paper clips. She explains that the tedious task of preparing the paper clips and hanging up the work became a meditative discovery of the art practice that was her grandmother's labour of love. And as an artist, it helped her realize how powerful devotion to one's craft can be.