Due to the political situation, the Lebanese artists of Jerusalem In My Heart can't go to the city — so they channel its spirit into what they create.

As Lebanese artists, they can't visit Jerusalem — so they channel its spirit into what they create

Jerusalem In My Heart is an acclaimed duo from Montreal made up of filmmaker Charles-André Coderre and musician Radwan Ghazi Moumneh. Their performances are immersive, combining blown-out film, sounds made from instruments like buzuqs and synthesizers, vocals and the whirring of projectors. And all of it comes together to create a complex vision of a place that, for Moumneh, feels far away.

He says, "The name Jerusalem In My Heart was actually taken from a record by a very famous Lebanese singer. The title was really nice because it evoked something very profound and meaningful to me, talking about a place that we, as Lebanese people, cannot go to due to politics. So it's a place that remains in the spirit and the heart and the mind, and not a tactile thing that you can touch and feel and be in." 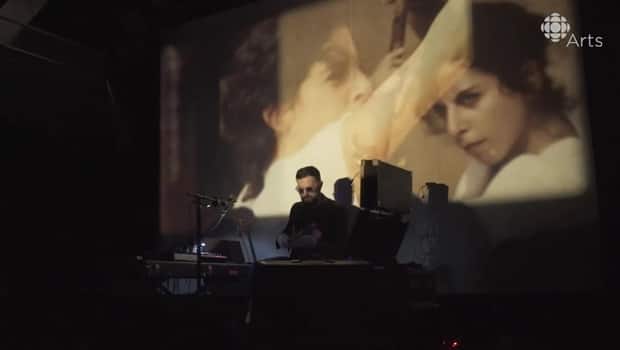 Jerusalem In My Heart perform in Brussels, Belgium

1 year ago
5:04
Montreal duo Jerusalem In My Heart use film and audio to conjure an emotional vision. Filmmaker: Thomas Szacka-Marier 5:04

Filmmaker Thomas Szacka-Marier caught up with Moumneh and Coderre as they prepared for a show in Brussels, Belgium, where they've built a dedicated audience. As you'll see in this video, their performances are intricate — to say the least.

Coderre handles 75 film loops (all categorized and intricately hung) while Moumneh wrangles several instruments, all in the name of creating a powerful experience that draws their Belgian fans in. Moumneh says, "For some very odd reason that we can't seem to put our finger on it, we have really good connection with Belgium — or Belgium connects with us, I don't know. We have just a very attentive audience here. They come with obviously knowing the material. You can really feel people are attempting to go on this journey that you're telling them maybe they should try."