DJ Classic Roots on playing NAIG: 'A guy like me can do something and make a difference'

The Toronto techno artist talks music, dance and playing the North American Indigenous Games. Plus, watch his performance from the opening ceremony.

At the opening ceremony of the North American Indigenous Games, he was the guy in the Team Rocket shirt grinning behind the decks, while a squad of dancers moved to his "pow wow techno" beats. But ask Joshua DePerry — a.k.a. DJ Classic Roots — what he remembers about that night performing to young athletes and their families at York University's Aviva Centre, and all he recalls is a blur of hype and excitement. "Once I was on stage, the adrenaline kicked in," he laughs, but DePerry says he remembers how he felt when he got the call to be part of the show in the first place. He knew he had to say yes.

"The reason why I wanted to be a part of it was just to show a guy like me can do something and make a difference," DePerry tells CBC Arts. The games, which run in Toronto to July 21, host more than 5,000 participants from all over the continent, making it the largest sport and culture gathering of Indigenous peoples in North America. "I'm Indigenous myself," says the 29-year-old producer. 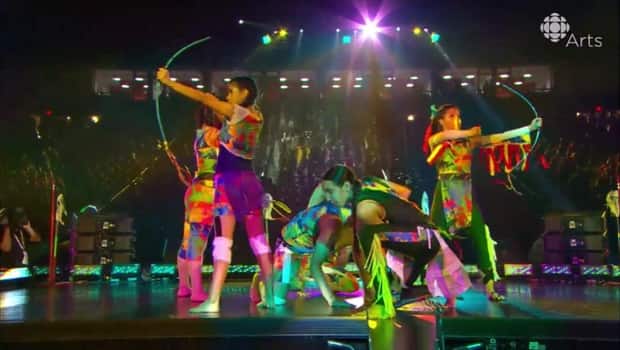 Raised in Thunder Bay, Ont. and based in Toronto, if DePerry looks familiar, you might remember him from "Indomitable" — a 2016 video by DJ Shub and Northern Cree where he plays a Bay Street office worker by day, pow wow star by night. Or maybe you know him from Shub's live show instead. (He regularly joins the former member of A Tribe Called Red on stage, dancing in full regalia.) He's an award-winning artist in his own right, though. His 2015 record, Hack the Planet won Best Pop CD at that year's Indigenous Music Awards, for instance. And while he says his sound is currently veering towards "Berlin-style techno," his past releases have incorporated music from his Anishinaabe culture, with traditional drumming and singing in the mix.

For NAIG, the opening ceremony's choreographer Santee Smith asked him to compose two brand new tracks. They're called "Lacrosse" and "The Archer," and DePerry says that making the songs was a collaborative effort not just between him and the choreographer, but with the six youth dancers who performed an interpretive piece to the songs. They offered notes throughout the workshop process, which he used to revamp the music.

They're all old friends, in fact — DePerry worked with some of the dancers during the Toronto 2015 Pan Am Games. The troupe's youngest dancer, Ascension Harjo, actually recorded vocals for a track he produced for that particular event, and DePerry is a performer and teacher with Smith's contemporary dance company, Kaha:wi Dance Theatre.

The reason why I wanted to be a part of it was just to show a guy like me can do something and make a difference.- Classic Roots (a.k.a. Joshua DePerry )

He says he considers himself a dancer first. "I started b-boying or breakdancing when I was 12 years old and I fell in love," he says. By 17, he started following a group of friends to local pow wows. "They really encouraged me to get into men's fancy dancing."

At the same time, he was making tracks in his bedroom, teaching himself how to be a producer. Inspired by French disco titans like Daft Punk and Justice, he says he started incorporating sounds from his heritage much later — an evolution that came about because of his dance career. "I was inspired by working with Santee Smith, to be honest," he says. In 2013, he performed in a Kaha:wi show called The Honouring, a piece that tells the story of First Nations warriors in the War of 1812. "It really came from there," he says. "The music [...] it really had so many different elements, not just the traditional style but also contemporary, electrifying sounds. That's how I was really inspired. ... It really gave me the idea — why not? To add this stuff into my work and express how it feels."

Genre-wise, he doesn't see himself working exclusively in "pow wow techno," though. "I really want to be versatile with every international rhythm that I can experience," he says. But at the same time, celebrating his roots is important —whether through DJing, dancing or producing. "I really just want to bring the culture to Indigenous and non-Indigenous people as well."