Choreographing dance for the screen vs. the stage: Go inside our new mockumentary series Off Kilter

Onstage, you see the beginning, middle and end. On the screen, little glimpses need to tell the story.

Onstage, you see the beginning, middle and end. On the screen, little glimpses need to tell the story

The series brought on acclaimed choreographer Shawn Hounsell (Royal Winnipeg Ballet, National Theatre Ballet - Prague) to bring the story gracefully to life. In this video, Hounsell takes you inside the choreography for the series, and explains the difference between how you choreograph for the screen vs. the stage. 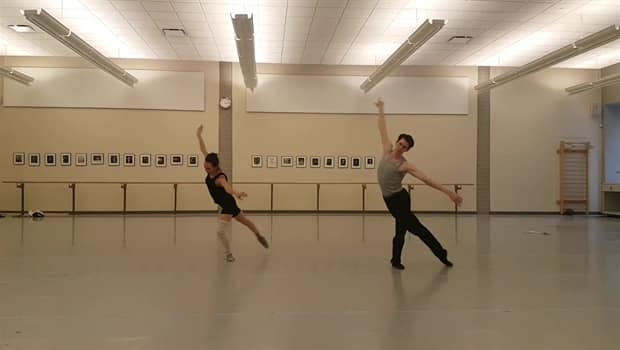 Off Kilter: Choreography for stage vs. screen

2 years ago
1:57
Choreographer Shawn Hounsell takes you inside the meticulously planned dancing for our new series Off Kilter. 1:57

So really, what does it come down to? Hounsell tells us: "Essentially the difference is that we're not looking at a continuous event — the beginning, middle and end — we're looking at small segments that facilitate the storytelling."

Even with a tight timeline to teach the choreography to the dances from the National Ballet of Canada, Hounsell was determined to not cut corners. "We really didn't want to rely on clever editing and smoke and mirrors. We were aware that the two solid elements that we had going in were choreography that could stand on its own and also phenomenal artists that could bring that choreography to life."

Tell me more about Off Kilter, please!

Off Kilter highlights the less glittery parts of the struggle of going from pariah to revered choreographer. Shot as a mockumentary, each of the seven-minute episodes focuses on a different unofficial — but just as necessary — step in the course of (re)building a career. Season 1 spans "The Denial" to "The Disappearance" and demonstrates how a significant part of the process is doing everything you can to avoid the process. Stream the full series now.

Milton Frank was the ballet world's up-and-comer who never up-and-came. After a massive plagiarism scandal, Milton keeps meaning to make a triumphant return to the world of professional ballet. It's been the next thing on his to-do list for 25 years, in fact. But it's not until his comeback gets intertwined with the agendas of a PR genius and an almost-retired ballerina that any of those intentions start to materialize.

Like many brilliant artists, Milton's struggle is to get over the past and out of his own way. A comedy that lingers in the awkward silences as much as it does on the stunning choreography of the acclaimed Shawn Hounsell (Royal Winnipeg Ballet, National Theatre Ballet - Prague), Off Kilter documents the remaking of a man into the critically acclaimed asshole he never got to be in the 90s.

Milton Frank has come back to the studio after a 20-year absence, but under no circumstance is anyone to call it a "comeback." This is just for fun. A lark. A whimsical experiment.

Stream all of Off Kilter now on the CBC Player and watch out for new episodes weekly on our YouTube channel.