Instagram superstars, activist poets and the most beautiful (and disturbing) porcelain dolls you’ve ever seen: at CBC Arts, this was 2016.

Watch the videos that were seen (and shared) the most

Instagram superstars, activist poets and the most beautiful (and disturbing) porcelain dolls you've ever seen: at CBC Arts, this was 2016.

We've looked back at the stories that meant the most to you, and gathered the videos that were watched and shared more than anything else.

Whether you're revisiting a favourite short doc or discovering it for the first time, these are our Top 10 greatest hits of the year.

10. Black love matters, and this artist collected 3,500 family photos to prove it

As Zun Lee told us back in February, "Black love and black joy matters" — and the Toronto-based artist's work is showing the world. We brought our cameras to "Fade Resistance," his exhibition at the city's Gladstone Hotel. A collection of found photographs, Polaroids and snapshots of black families from the '70s through to the present day, Lee has amassed thousands of these pictures over the last couple years. In the video, he shares the ideas behind the project and reveals the very personal story that inspired it all.

9. She's one of Instagram's biggest artists, and it took a near-death experience to make it happen 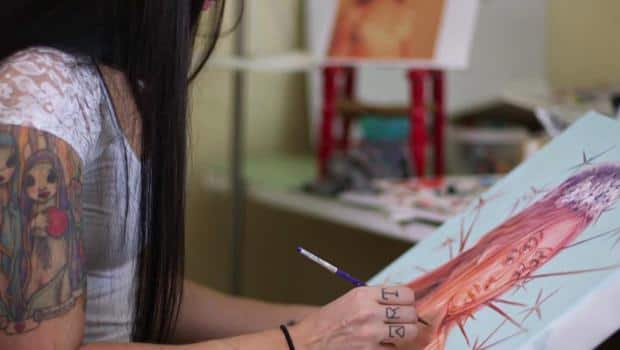 5 years ago
4:08
Artist Alex Garant on her recovery from a heart attack, and how it provoked her decision to become an artist, a gym rat, and to face every fear. 4:08

The day after she turned 30, Alex Garant had a heart attack. It nearly killed her.

"I realized how everything was holding on to that one little thing, which is your heart beating," she told CBC Arts in early 2016. So while recovering in a Toronto hospital, Garant had an epiphany. Lying there, all she wanted to do was paint — and as soon as she was better, that's exactly what she did. Today, her pop surrealist paintings receive an enormous amount of attention online. (On Instagram, for example, she has more than 70,000 followers.) The self-described "queen of the double eyes," Garant's portraits appear to vibrate — which to her, is "a good reflection of passion in life." 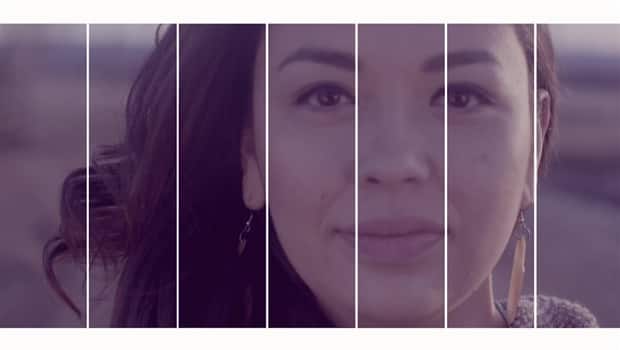 Dear Mr. Prime Minister: this poet has something to say to you about Indigenous rights

4 years ago
3:15
Writer Helen Knott has a call out to Justin Trudeau to protect the rights of Canada's Indigenous population. 3:15

Filmed on the plains of the Peace River region, poet and activist Helen Knott delivered this poem, an open letter to Prime Minister Justin Trudeau. Her challenge to him: remember the promises made to Indigenous people. "We're going to continue to fight," she says in the piece. "We're going to continue to rise up like sage smoke carrying valley and prairie prayers, just like we have done for the past 500 years — because in case you haven't noticed, in spite of everything, we are still here."

7. This is what happens when you ask a poet to write about Trump

This poet has some words for President-Elect Donald Trump

4 years ago
1:11
Refusing to be voiceless during America's changing of the guard, spoken word artist and activist Shadiya Aidid shares her opinions on who she calls "Mr. Presidential with no credentials." 1:11

Maybe the U.S. election left you speechless. That's why we asked a spoken word artist to share their reaction. Toronto's Shadiya Adid delivered this original piece addressed to Donald Trump, a.k.a. "Mr. Presidential with no credentials." The first video in a series we're calling "Poetic License," expect to see more like it in 2017.

6. There's a glowing temple at the foot of the Andes, and it was designed by Canadians 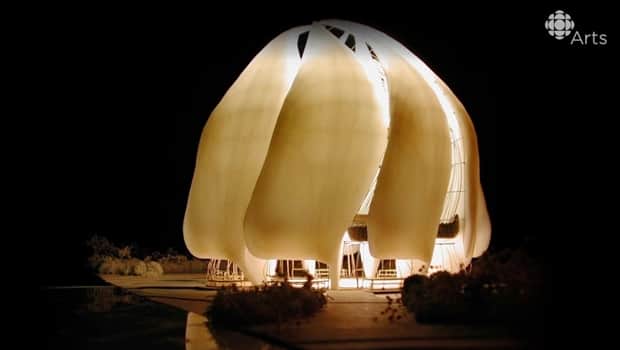 This light-filled fantastical creation is a new Bahá'i temple for Santiago, Chile

4 years ago
3:50
A translucent dome filled with light from within was the dream for Toronto's Hariri Pontarini Architects, when they designed a new Bahá'i temple. 3:50

Toronto's Hariri Pontarini Architects have spent 10 years developing a Bahá'í temple on the edge of Santiao, Chile. At night, the structure glows with serene light. We travelled with them to the building site to see it firsthand and learn more about their vision: "If it looks like a mosque or a church or a synagogue, it's going to exclude certain people — and so how do you create something that is allowing people to walk into it from all different directions in a spirit of tolerance, openness, transparency?" 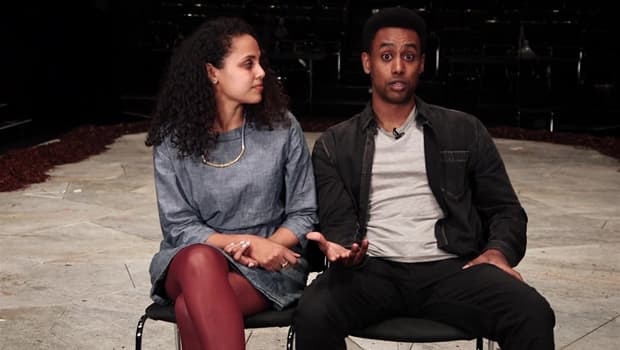 4 years ago
3:01
CBC Arts catches up with cousins Weyni and Araya Mengesha in the Tom Patterson Theatre in Stratford, Ont. to talk about the new production, Breath of Kings, their personal connection to the material, and to find out Araya’s thoughts about being the first actor of colour to play a king at Stratford. 3:01

This past season, the Stratford Festival staged Breath of Kings, a new adaptation of Shakespeare's histories. Directed by Araya Mengesha, the production starred the Dora nominee's cousin, Weyni Mengesha, as Henry V. That family connection alone is pretty remarkable, but for Weyni, the project was especially important because it marked the first time a person of colour had played a Shakespearean king at the festival. "For some people, they're going to experience me as Hal," he said. "And that's going to be their first experience with these plays, with Shakespeare. That's so exciting to me...I never had that growing up."

4. Vancouver's Lauren Brevner: 'I owe my entire career to Instagram' 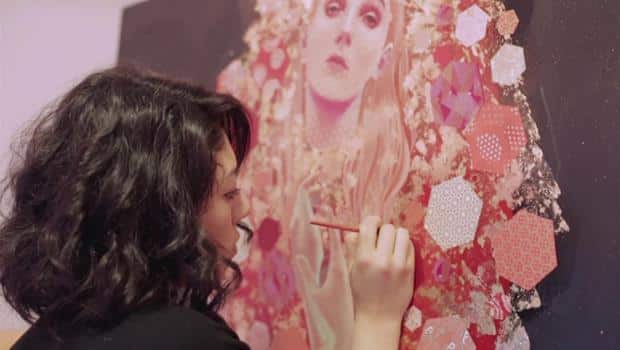 5 years ago
4:04
Lauren Brevner lets CBC Arts into her studio as she puts the finishing touches on her latest works. She tells us about the Japanese designer, and the social media platform, that changed her life. 4:04

Every painting she's ever sold, all the accolades she's received — according to Lauren Brevner, her entire career is thanks to Instagram. We met the artist during a February visit to her Vancouver studio, where she creates lush and fantastical portraits using paint, gold leaf and Japanese paper. Brevner's entirely self-taught. As anyone carrying a few thousand in student debt knows, art school's expensive — so expensive that for Brevner, "it wasn't even an option." So, after an apprenticeship with Japanese designer Sin Nakayamal, she embarked on a DIY education, turning to books and Google to learn everything she knows. The biggest lesson of her journey so far: "There's no one way to achieve any kind of success." But in her case, she says, "the best way to learn is just do."

3. These artists are on a never-ending road trip, and they're Instagram famous because of it 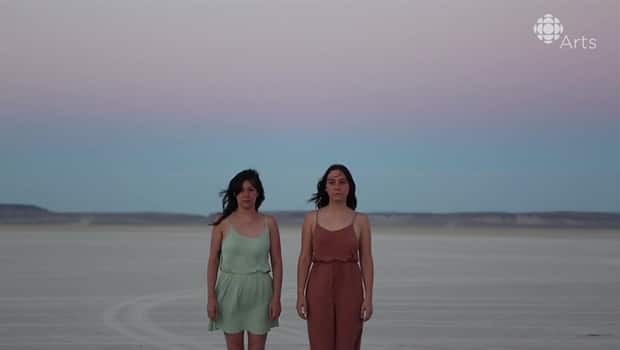 4 years ago
4:41
Find out why for over three years, Jillian Mann and Kyla Trethewey have given up a home address for the highway. 4:41

Take a road trip with Kyla Tretheway and Jillian Mann, a.k.a. Our Wild Abandon. Originally from B.C., the highway is now their home, and thanks to a featured spot on Instagram, their audience has grown to more than 133,000 followers — fans who track their adventures all over North America. Travelling full-time is a fantasy for some, but it's also a full-time job. In this piece, they share some of the challenges that come with living (and working) out of a camper, including a 2015 accident that nearly totalled their van — and their dreams.

2. Life's not perfect, even for princesses 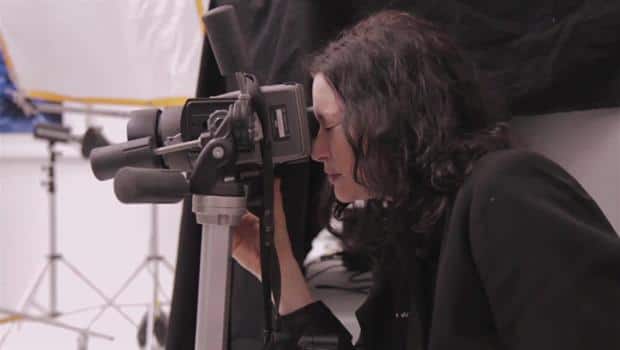 Dina Goldstein's using her photography to start a provocative conversation

5 years ago
3:37
Vancouver-based photographer Dina Goldstein knows her photographs might disturb some people, but they'll also get them talking 3:37

What if Prince Charming turned out to be a deadbeat dad? Or if Cinderella traded her glass slippers for beer goggles? Vancouver's Dina Goldstein is known for her fractured fairytale photographs — images that subvert the idea of a happy ending, whether it's being promised by religion, advertising or bedtime stories. In this video, she invited us to a shoot for her latest project, "Modern Girl."

1. These dolls are as far from Barbie as you can get

5 years ago
4:11
When she was six years old, Marina Bychkova made her first doll out of the back of a cereal box. Little did she know that one day her dolls would sell for hundreds of thousands of dollars. 4:11

Watch this video and you'll be charmed by Marina Bychkova's handmade dolls — but you'll also be disturbed. As she says in the piece, "Dolls have a huge potential for exploring themes of social justice." Disease, abuse, sexuality: look closely and you'll see that these exquisite objects of fantasy are confronting you with some hard truths about humanity.