Art 101: Scary art that makes you want to hide under the bed

Prepare yourself to learn about the long history of terrifying art.

Prepare yourself to learn about the long history of terrifying art

I'm Professor Lise, not really a professor, and this is Art 101, not really a class. We're here to go on a deep dive of an idea, an artwork or a story from the art world that's controversial, inexplicable or just plain weird. Today on Art 101 we'll get to see a few works of art that have shocked us.

Back in March, Japanese artist Keisuke Aiso destroyed his sculpture Mother Bird. It had the head of a woman with a stretched out mouth or beak and the body of a bird with human-like skin. The artist says it was not intended to be long-lasting anyway, that it was falling apart on its own — but Aiso may also have been reacting to the fact that his sculpture had been internationally notorious, scaring kids using the internet, and arguably scaring adults even more. 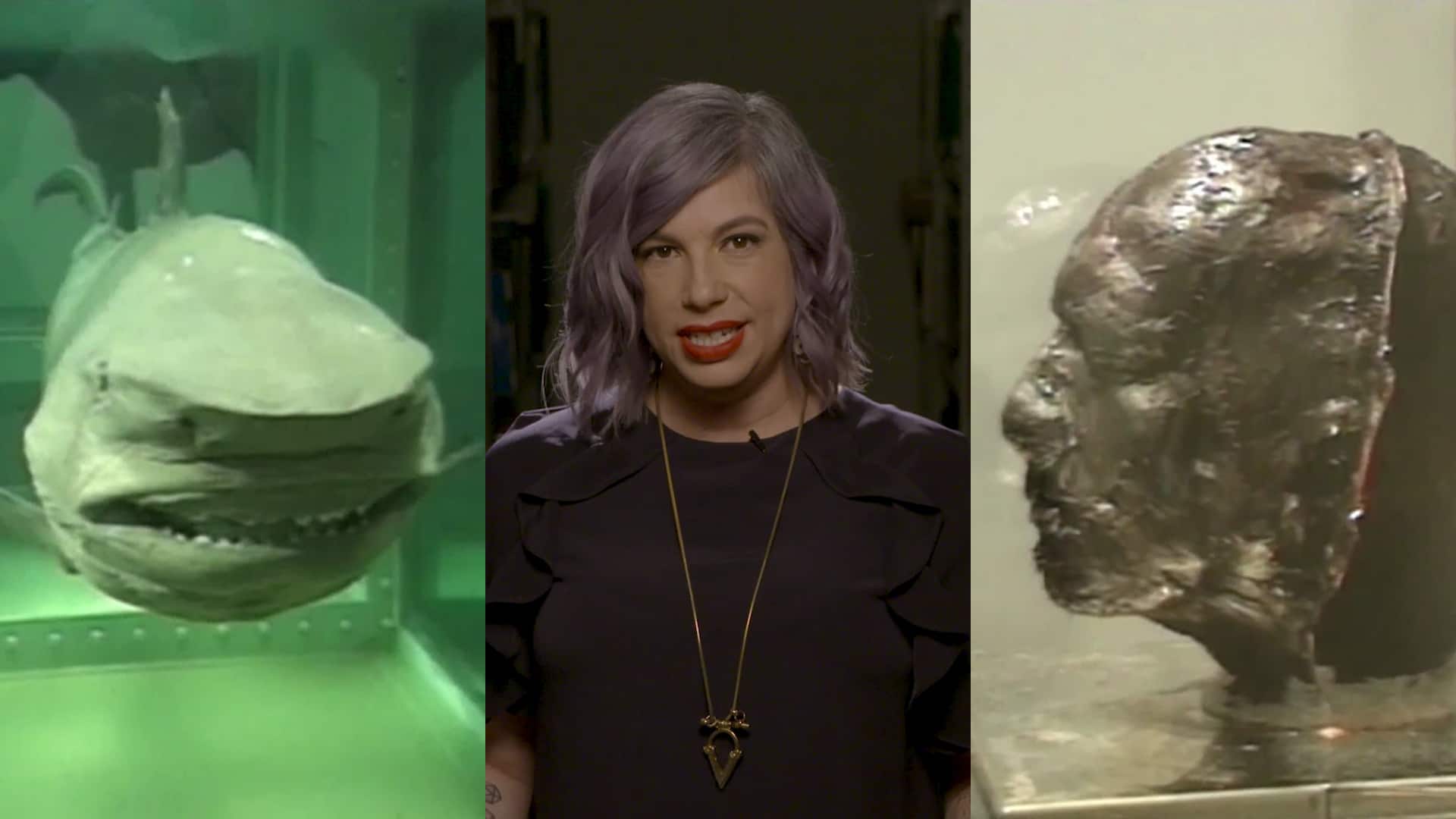 Art 101: Scary art that makes you want to hide under the bed

1 year agoVideo
5:30
Prepare yourself to learn about the long history of terrifying art. 5:30

Mother Bird became known to frightened parents as Momo, a ghastly figure who would show up in YouTube videos grooming their children to commit more and more dangerous acts and eventually convincing them to attempt suicide. Now, there's little evidence that this phenomenon actually took place, but the myth took on a life of its own as the image of Momo — which I fully admit gave me the heebie jeebies even to look at — started having its own life showing up in newspaper articles, as well as spliced in to YouTube videos.

Momo is pretty terrifying, but this installation by Jordan Wolfson runs a close second. Wolfson created his Female Figure in 2014 and the animatronic sculpture is a technological feat. When you walk into the gallery space, she alternates between dancing and singing covers of Lady Gaga and Paul Simon and confessing her thoughts to you in a quiet voice. Did I mention that her eyes also track you, staring at you no matter where you are in the room? Wolfson has become known for these works that speak about violence and fear, and about us as spectators. His most recent work Real Violence is a VR spectacle that viewers have been having genuine trouble getting through as they have to watch a digital version of the artist himself committing acts of violence to a stranger.

While Wolfson's work speaks to imaginary danger and imaginary violence, back in 1997, British artist Marcus Harvey came under very real public scrutiny for his painting called Myra. The painting is a portrait of a woman's face. It looks like it was taken from an image in the newspaper and it's completely formed from repeated child hand prints. They had been cast in plaster and used as a sort of paintbrush. On its own, the image doesn't depict anything but someone's face...until you find out the subject Myran Hindley was a serial killer, convicted of murdering children in Britain in the 1960s, and this painting is of her mugshot when she was arrested.

The work incensed viewers to the point where one of them attacked the work, prompting questions abut when and how it's appropriate to depict somebody who has done so much evil.

Work that scares us is not always so grim. But it is often work that is morbid, or makes us reflect on death, or just shakes us to our core. Take work by artist Damien Hirst, who first came to notoriety for his installation The Physical Impossibility of Death in the Mind of Someone Living. It's an artwork from 1991 made up of a tiger shark suspended in a case full of formaldehyde. Hirst went on to make other works featuring animals and formaldehyde, including ones where the body was split in half so viewers were looking at a cross section of the animal's insides.

Hirst has talked about these as works that provoke us to think about our own mortality. They're sort of contemporary memento mori. Viewers have been alarmed by the fact that he uses animals to do it, but that hasn't stopped Hirsch from continuing on his memento mori bent and becoming perhaps the richest living artist in the world.

Other artists have reflected on our inevitable demise in similarly graphic ways. In 1991, another British artist named Marc Quinn created a work called Self. The work is a head that looks like it was decapitated and put in a case — and it just happens to be made out of the artist's own blood. and every five years he would make a new version of the work out of fresher blood. Yes, it's another example of a memento mori, and successfully causes us to ruminate on mortality and death.

Lest you think that violence, strange creatures or shocking scenes are new to the art world, think again. Artists have been scaring us for centuries. Look at any image of the last judgment or of hell and you'll see some pretty terrifying monsters. In the 1600s, Italian artist Artemisia Gentileschi painted Judith Slaying Holofernes, a pretty graphic depiction of Judith as she removes the head of Holofernes. Francisco Goya's depictions of the disasters of war in the 19th century showed the horrors that came from conflict in shocking detail. And his painting Saturn Devouring His Son of the 19th century still makes me steel myself before I can look at it.

And sometimes what scares us can be satire or uncomfortably funny, like Italian artist Maurizio Cattelan's installation of Pope John Paul II hit by a meteor from space. While you can definitely call this work sacrilegious, it's also a scathing satire of religion itself and a taking down of an icon by an artist who comes from Italy.

So what piece of art has made you want to hide under the bed? Is there something you've never been able to look at without watching Home Alone afterward to make you feel safe again? Let me know and I'll see you next time for more Art 101.