A professional dancer's advice for ballet partnering: do less

Harrison James Wynn from our new ballet mockumentary Off Kilter takes you through the secrets of partnering in ballet.

Our new ballet mockumentary series Off Kilter isn't just about the laughs — there's legit dancing in it too, featuring the talent of dancers from the National Ballet of Canada such as that of Harrison James Wynn. Wynn plays the character of Des in Off Kilter, and in this video he takes you through the secrets of partnering in ballet.

Wynn's general advice: do less. "The more experienced I've become in partnering, the more I've realized that the less you do the better." 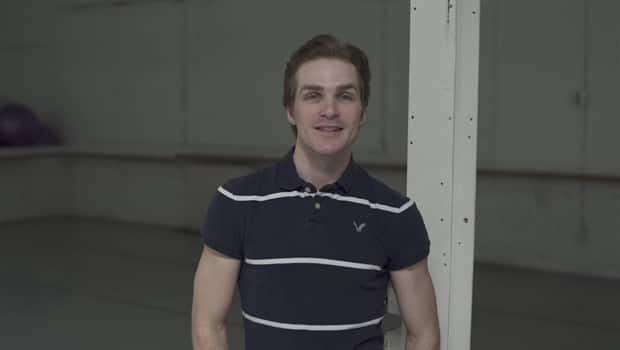 3 years ago
1:59
Yes, ballet is tricky, but The National Ballet of Canada's Harrison James Wynn has some advice to make partnering easier. 1:59

For Wynn, many of his expectations of how he thought partnering would work are not how he found the most success in it with experience. "For a while I put a lot of energy into lifting my partner up and trying to support her and making her feel really light on her feet. It actually ends up making them feel more uncomfortable and like they can't find their own weight."

So don't hold on to your partner too tight, but also, lift from the hips: "We always get taught to hold people by their waist. It's actually harder to keep that engaged if someone's moving you from your waist, but if you've got [their] hips you've got quite a solid, really strong base."

OK, but you have to be super strong, right? Wynn says less than you might think! "I've had people make comments about how strong we must be to lift people over our heads. There's an element of strength to it, but so much of it is coordination. The best kind of partnering makes it look like it's effortless and like neither of you is doing that much."

Partnering: do less. Got it. I think we're all ready to be professional dancers now.

Tell me more about Off Kilter, please!

Off Kilter highlights the less glittery parts of the struggle of going from pariah to revered choreographer. Shot as a mockumentary, each of the seven-minute episodes focuses on a different unofficial — but just as necessary — step in the course of (re)building a career. Season 1 spans "The Denial" to "The Disappearance" and demonstrates how a significant part of the process is doing everything you can to avoid the process. Stream the full series now.

Milton Frank was the ballet world's up-and-comer who never up-and-came. After a massive plagiarism scandal, Milton keeps meaning to make a triumphant return to the world of professional ballet. It's been the next thing on his to-do list for 25 years, in fact. But it's not until his comeback gets intertwined with the agendas of a PR genius and an almost-retired ballerina that any of those intentions start to materialize.

Like many brilliant artists, Milton's struggle is to get over the past and out of his own way. A comedy that lingers in the awkward silences as much as it does on the stunning choreography of the acclaimed Shawn Hounsell (Royal Winnipeg Ballet, National Theatre Ballet - Prague), Off Kilter documents the remaking of a man into the critically acclaimed asshole he never got to be in the 90s.

Milton Frank has come back to the studio after a 20-year absence, but under no circumstance is anyone to call it a "comeback." This is just for fun. A lark. A whimsical experiment.

Stream all of Off Kilter now on the CBC Player and watch out for new episodes weekly on our YouTube channel.