5 things we'll remember about An Honest Farewell, long after Honest Ed's is gone

It was the last chance to "get lost" inside the legendary discount store — and on that point it definitely delivered.

An Honest Farewell, Toronto's four-day celebration of Honest Ed's, wrapped on Sunday, and according to organizers, as many as 12,000 people came through the revolving doors during its run — all paying their respects, making new memories and just getting totally lost for the last time ever.

If you wanted to roam Ed's 160,000 square-feet of living nostalgia, aMazement was the best ticket of the weekend, with site-specific installations and original performances taking over most of the old shop floors, from the walkways to the bargain basement.

Billed as an "immersive art maze," this was no literal labyrinth (so much for keeping things "honest," guys). But with or without a trip to the bar (evening events were licensed), the experience was undeniably dizzying, featuring more programming than you could discover in a single visit — in a building that was already infamously impossible to navigate.

This CBC Arts video tour will give you a feel of what you'd have found inside, and with a focus on audience participation and photo ops, the vibe Friday night was full-on funhouse — which the store kind of already was anyway, wobbly mirrors and all.

Once Honest Ed's and Mirvish Village are gone, flattened for a new development, these are the five things we'll remember about the event.

What's your favourite memory of Honest Ed's? If you weren't already flipping through your mental Rolodex from the time you got inside, aMazement was ready to literally ask you the question — and then politely demand that you share it in writing.

Life After Utopia by Alexandra Hong, William Pemulis and Sheraz Khan — a balloon-filled nook, bathed in Instagram-friendly magenta and blue light — was arguably the most popular example. (There was a lineup to see it Friday night.) Visitors were invited to write down their stories and tie them to balloons — creating a sort of floating guest book.

Dying Well Collective staged something similar (minus the inflatables) on one of the basement levels, asking people to write their memories on cards — and on walls and on mirrors. (Hey, if it's all getting torn down, anyway...)

Honest Ed's has walls on walls on walls, but unlike some of the other graffiti artists tapped for the festival — including one of CBC Arts favourites, Montreal's Miss Me — BirdO and Getso took things to another dimension, so to speak.

Their collaboration, Anamorphicism, produced one of the few truly trippy experiences inside the "art maze." Per the title, it was all about creating an "anamorphic" effect — a skewed perspective where you need to be at just the right vantage point to see an image clearly. In this case, the optical illusion was on the words "create" and "destroy" — a straightforward reference to the evolving neighbourhood.

Imagine the night light you had as a kid, but 1,000 times bigger. Chris Foster's March of Development was a floor-to-ceiling "shadow lamp" of the Toronto skyline. The effect was heavy on spectacle, but also on charm — especially if you got close enough to discover the piece's semi-secret "window," which revealed the detailed models inside.

Toronto artist Tibor Hargitai made the prints, capturing them on one kilometre of white plastic. For An Honest Farewell, the entire spool was rolled out on the store's basement floor, first spelling out "love" and then, later during the festival, "live." The words were apparently chosen to reflect how the artist, an immigrant from Hungary, felt when he first visited Honest Ed's.

After viewing the installation, visitors were invited to take a footprint with them, a very different souvenir from a place that once sold CN Tower coffee mugs and postcards.

For all the programming, in the art maze and beyond, the biggest attraction had to be Honest Ed's itself, and the thing that felt most magical about aMazement was that it didn't just reactivate the old shop floors. The festival opened up spaces no shopper — no matter how regular — would have ever seen. The store's wood-panelled office, for example — still equipped with an antique punch-clock and featuring an (inexplicable) stained-glass ceiling — was non longer off-limits. If you timed your trip right, you could catch a performance from Convergence Theatre in the space, though the room was plenty surreal on its own. Strange and unexpected access like that made the experience.

Missed An Honest Farewell? Go inside Honest Ed's in this behind-the-scenes video. 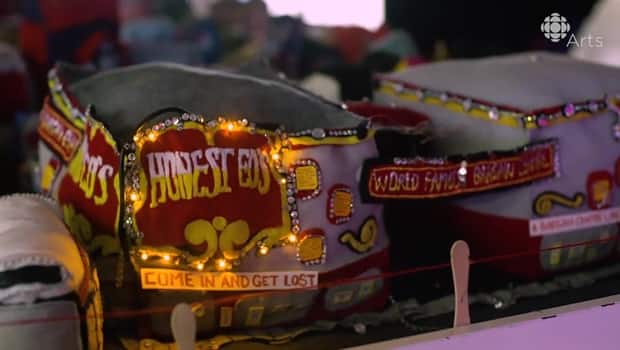 Toronto is throwing a giant goodbye party for Honest Ed’s

4 years ago
1:29
An inside look at this once-in-a-lifetime celebration: a farewell to Toronto’s beloved retailer. 1:29