When Santa Claus visited his four-legged admirers in Moncton, N.B.

The man in red came to visit some lucky dogs at a N.B. dog-grooming salon because they couldn't meet him at the mall.

Dog groomer Blanche Cormier saw pets being left out at the mall, so she brought Santa to her shop 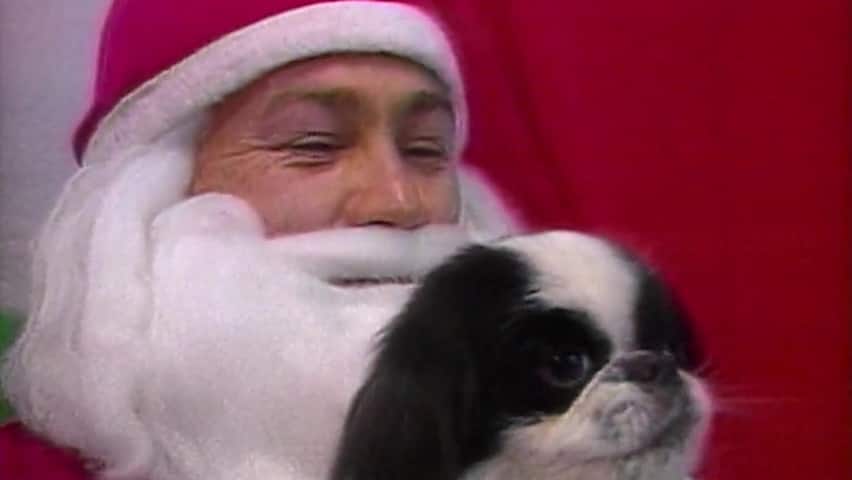 Blanche Cormier saw that furry friends were being left out, when a certain VIP came to town ahead of Christmas, year after year.

And it gave her an idea that was ahead of its time.

"For years, I've watched Santa in the malls, taking pictures with children ... and I thought: 'Now, listen: Here's our pets, here, they're not allowed in the malls,'" she told the CBC's Lynn Herzeg, back in November of 1986.

"So, this year, I said: 'This is it. Santa's going to come in and have our pets' pictures taken with Santa.'"

That's how Santa ended up booking portrait appointments at Cormier's dog-grooming salon and it's also what compelled CBC to drop by.

For $6, pet owners could give their pet some one-on-one time with Santa and go home with a card that said "holidays are a time to remember PAW-fect friends like you!"

A woman whose whose two dogs — Dixie and Daisy — had their fur dyed for the holidays the previous year, opted to go with a Santa picture the year that CBC visited Cormier's shop.

"It's just sweet, it turned out exceptionally well," the customer told Herzeg.

"They really look forward to coming, so I couldn't deprive them of a chance to have their picture taken!" she added, laughing while doing so. "They like to pose, they like attention, so they loved it."

The man in red said he was "surprised" how much the pets took to meeting Santa.

At that point, Santa was sitting for a dozen portraits, three times a week at Cormier's salon.

It was clear to her that she was onto something, though — as Herzeg explained to viewers with an appropriate pet pun.

"Blanche Cormier isn't sure what doggie gimmick she'll come up with next. There's a good chance she'll try some other holiday, now that Christmas has gone to the dogs," said Herzeg.