It was yet another twist in the highly dramatic year of Pierre Trudeau's life that was 1979. 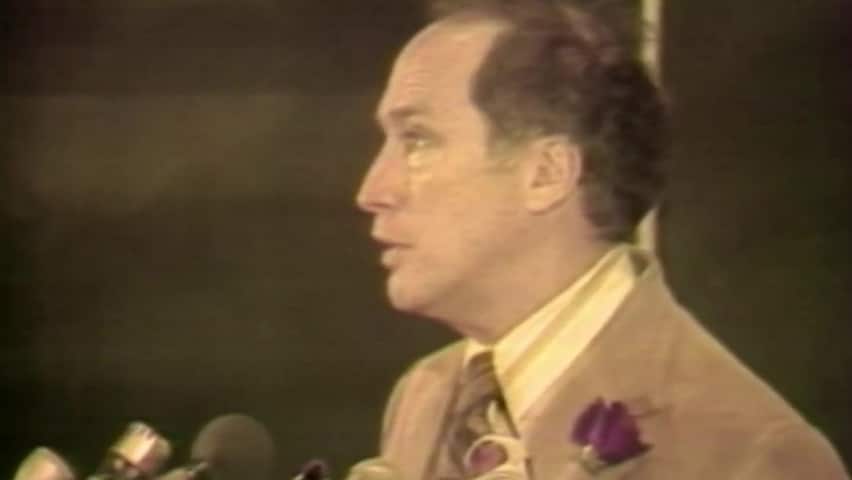 41 years ago
2:18
A few days after announcing his intent to step down as Liberal leader, Pierre Trudeau said he supported proportional representation. 2:18

It was yet another surprising moment in the highly dramatic year of Pierre Trudeau's life that was 1979.

Forty years ago, the Liberal leader said he believed Canada's political system needed shaking up — in part to deal with the regional imbalances that saw major parties under-represented in the provinces of Alberta and Quebec.

During a conversation with students at the Université de Montréal on Nov. 23, 1979, Trudeau revealed he supported a move to proportional representation at the federal level.

"He said he was now in a position to recommend that parties would get regional representation in the Commons or the Senate based on popular vote, as well as on who won riding races," said Mark Phillips, summarizing Trudeau's stated viewpoints on The National that night.

"This would end the polarized situation of a dominant Liberal bloc from Quebec, for instance, and a Tory bloc from the west. It would also give everyone a greater share and identity in the national government."

His remarks came just a few days after the 60-year-old, disco-hopping Trudeau said he would be stepping down as Liberal leader.

They also came during a year in which the Liberals won the popular vote during the general election, but won fewer seats than the Progressive Conservatives.

That result left Canadians with a new prime minister, Joe Clark, as well as a PC government in power, and it put the Liberals onto opposition benches for the first time in over a decade. It also meant the two leaders had to switch residences.

'We have to move in this direction'

Of course, Trudeau's plan to exit Canada's political scene didn't go as planned, as further drama would follow that December — namely the fall of the PC government and the triggering of an election that returned the Liberal leader and his party to power in February of 1980.

Yet Trudeau stood by his remarks on proportional representation heading into the election, telling CBC Radio's Sunday Morning that same month that it was something the country needed to do.

"I think we have to move in this direction," he said.

Regardless, proportional representation didn't happen, though the issue of regional imbalances in Canada's government has never really gone away.