Only in modern times would having too many potatoes be considered a problem.

In 1980, farmers in eastern Canada were getting lower prices for their plentiful potatoes 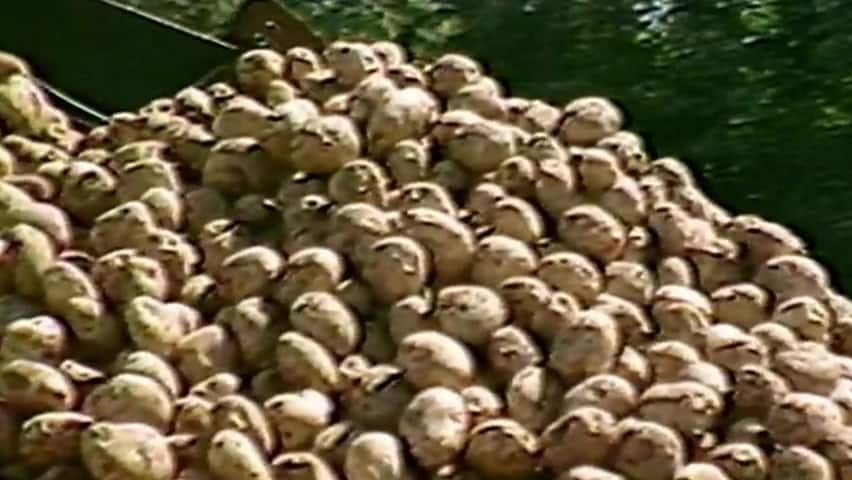 A need to market potatoes?

40 years agoVideo
1:53
Too many potatoes on the market meant lower payouts to farmers. 1:53

Only in modern times would having too many potatoes be considered a problem.

That was the case at the start of the 1980s, when potato farmers in eastern Canada were getting good yields and so were tater-tenders in other regions.

And that surplus of spuds was the crux of the problem, as it was driving down the price the farmers in Ontario, Quebec and the Maritimes could get for their crops.

"For the past three years ... there have been high yields everywhere," the CBC's Bob Allison told viewers on The National on Sept. 3, 1980.

"That's good for consumers, but bad for farmers who've been getting half as much as it costs them to grow the potatoes."

Amid low prices, farmers were scrambling to sell their spuds and stay solvent.

"Inevitably, federal and provincial governments have spent millions of dollars in support payments to keep the farmers from bankruptcy," Allison said.

At the time, hearings were being held to examine the possibility of establishing a regional potato marketing board that would help to stabilize prices.

A 'complete disaster' of marketing?

Allison reported that various stakeholders in the potato industry had agreed "there should be some form of orderly marketing for potatoes."

And some were clearly unhappy with how that had otherwise been handled.

Les Armstrong of the Ontario Potato Producers Marketing Board declared the ongoing marketing effort of potatoes in eastern Canada as "complete disaster."

But there was disagreement on how much power such a board should have.

'Prices will probably go up'

As Allison reported, the Consumers' Association of Canada was "not opposed to marketing boards, as long as they protect both farmers and consumers."

However, Janice Kerr of the Consumers' Association of Canada said it had been her organization's experience that similar arrangements for "eggs, chickens, turkeys and industrial milk" had seen "few net benefits realized by consumers from the regulation of inter-provincial production shares and producer prices."

The National's report also indicated that the potato harvest taking place at that time was seeing lower yields in eastern Canada and elsewhere.

"That means prices will probably go up, farmers will repay some loans and the urgency for an eastern potato marketing board may diminish," said Allison.