Wallis Simpson never became Queen, even though her husband had once been King.

Wallis Simpson never became Queen, even though her husband had once been King.

But the twice-divorced American socialite had a dramatic impact on the Royal Family when her relationship with the man who became her third husband rocked the House of Windsor and directly affected who would wear the crown.

Simpson had been married, divorced and married again by 1930, when she met Edward, Prince of Wales, who would later be known as King Edward VIII.

The two had an affair, which was hidden from the British public for years, as Simpson and her final husband-to-be grew closer.

As CBC reporter Don Murray put it decades later, it was "an open secret around the world, kept only from the British public by a disapproving government and a compliant press."

In the interim, the death of King George V in January 1936 put Edward, his eldest son and heir, in his place. Simpson was divorced from her second husband later that year, in theory clearing the way for the couple to marry.

But when the new King pushed to marry his now twice-divorced lover, he could not get the backing of the British government or the Church of England to do so. His family was also opposed.

The Canadian government was among the Dominion voices that did not support the union of Simpson and the King.

'Impossible to carry the heavy burden'

As the Royal Family's official website describes the drama, "eventually Edward realised he had to choose" between the woman he loved and his royal duties.

Indeed, the desire to wed Simpson led Edward, whose coronation had not yet taken place, to abdicate in December 1936. That decision effectively pruned his branch from the Royal Family tree.

It was a decision, he told his subjects, that he did not make lightly.

"You must believe me when I tell you," he said in a Dec. 11, 1936, radio address announcing the decision, "that I have found it impossible to carry the heavy burden of responsibility and to discharge my duties as King, as I would wish to do, without the help and support of the woman I love."

He added: "And I want you to know that the decision I have made has been mine and mine alone."

The abdicating King did not mention Simpson by name in the speech.

Many Britons listening to the address would only have learned Simpson's name days earlier when the story of the King and his lover exploded on the pages of newspapers, barely a week before he made his abdication announcement.

According to the Royal Family's website, King Edward VIII served just 325 days in the role he'd been groomed to take for life.

He and Simpson married in June 1937 in France — in a ceremony boycotted by the Royal Family — and lived in that country for much of the rest of their lives. They became known as the Duke and Duchess of Windsor.

The Duke of Windsor's abdication also put his brother Prince Albert into a role he'd not expected to have — serving as King George VI while his brother was alive and well.

With King George VI ascending to the throne, that meant his daughters' lives would also change, as the transition made his elder daughter, Elizabeth, the immediate heir to the throne and her sister, Margaret, the next in the line of succession.

For the Duke and Duchess of Windsor, a life in the royal spotlight was not forthcoming after the abdication.

Aside from a wartime appointment as the Governor of the Bahamas, the Duke of Windsor did not undertake further public service for Britain.

Some believed the Duke and his wife, who met and were photographed with Adolf Hitler in 1937, harboured Nazi sympathies. That image was a source of tension between the couple and the Royal Family.

"A picture of the Duke meeting Hitler was published and the Royal Family blamed Wallis's political influence," the CBC's Ann MacMillan told viewers on The Journal , when reporting on the death of the duchess in 1986.

Their life in exile and life of leisure in France was perceived by some outsiders to be glamorous, as the Duke and Duchess hobnobbed with famous people. But in large part, it occurred without much contact with his family.

In a televised interview with American journalist Edward R. Murrow in 1956, the couple was put on the spot about whether they had ever thought about "what might have been" had they been allowed to serve as King and Queen.

"The answer is most emphatically no," the Duke said.

The Duchess said they had vowed never to talk about that hypothetical scenario.

His passing prompted Simpson to make a rare trip back to England, where he was interred in the royal burial ground at Frogmore, near Windsor Castle. She was invited to stay at Buckingham Palace while she was in the country.

Death of the Duchess 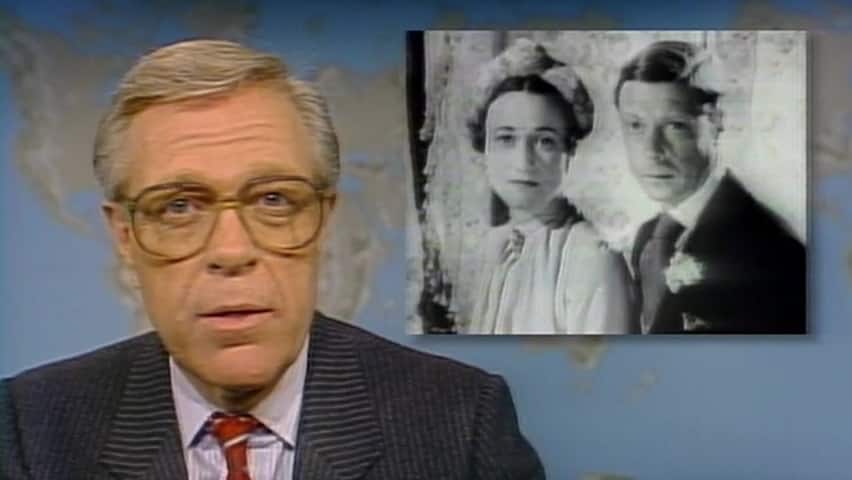 The death of the Duchess of Windsor

Simpson died on April 24, 1986, after a long period of ill health, at the age of 89. She was buried alongside her late husband.

Members of the Royal Family attended her funeral and interment.