'This is it': The day the Toronto Telegram folded in 1971

Many people scooped up a copy of the last Toronto Telegram when it folded 49 years ago.

Last edition saw twice as many copies printed, but 'it still wasn't enough' 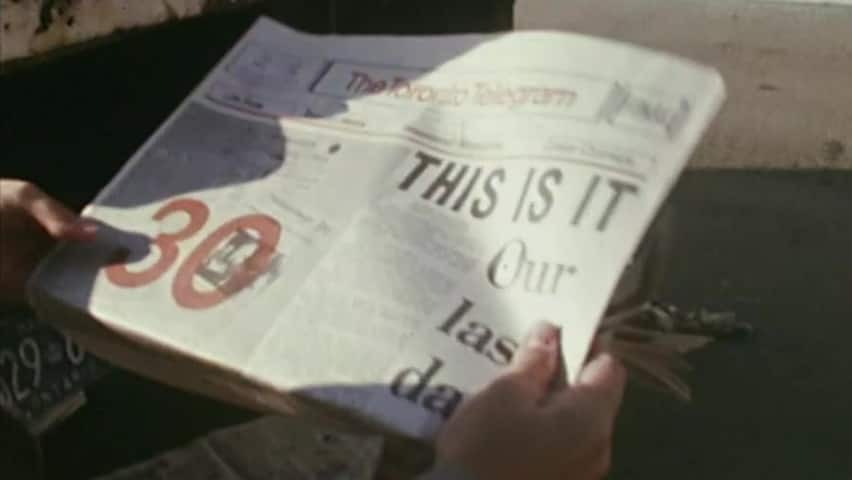 The Toronto Telegram folds in 1971

For a newspaper that was going out of business, there sure were a lot of copies on the street on the final day of its existence.

The Toronto Telegram's last edition was printed on Saturday, Oct. 30, 1971, and according to CBC's reporting, almost 400,000 copies were printed — twice the regular print run.

That's because long lines of people waited to buy the last-ever copy of the paper that had been published for nearly a century.

The all-caps, top headline succinctly explained the situation: "This is it."

A second line confirmed the occasion: "Our last day."

The closing meant that 1,200 people would no longer be working at the Telegram. However, John Bassett, the paper's publisher, said in the Telegram's final editorial that 800 of those employees had found new jobs.

'The Star's victory will be complete'

Employees had learned the Telegram would be folding six weeks before its final edition was printed. At that time, CBC reported that it was generally known that the paper "was in serious financial trouble."

However, the Telegram's core assets still held value, as proven when its subscribers' list was sold for $10 million to the rival Toronto Star — a payment worth more than six times that today, when inflation is factored in.

The paper also sold its office and printing plant to the Globe and Mail, which then leased those facilities to the Star for a two-year period.

"So, on Monday morning, the presses that once printed the Telegram will print the Star and the Star's victory will be complete," said Jones.

A wake for the Telegram was held at the Toronto Men's Press Club. Musicians played funeral music and Wally Henson, a longtime employee, wore a top hat and suit and burned a copy of the front page.

The fire was quickly doused by a drink that was thrown at it. The Globe and Mail reported Jack MacMillan, a Telegram messenger, had done so because "he could not stand the ritual death."

The paper's death was followed by the birth of another Toronto paper a few days later — The Toronto Sun.