The spud crop that put N.S. chip-makers in dark times — or a sweet spot

Millie's potato chip factory couldn't do much with the local potatoes available to them. But customers at the Bud the Spud chip truck ate them up.

Poor yield of 1986 potatoes was tough sell for chip makers (or an easy one, depending on the chip) 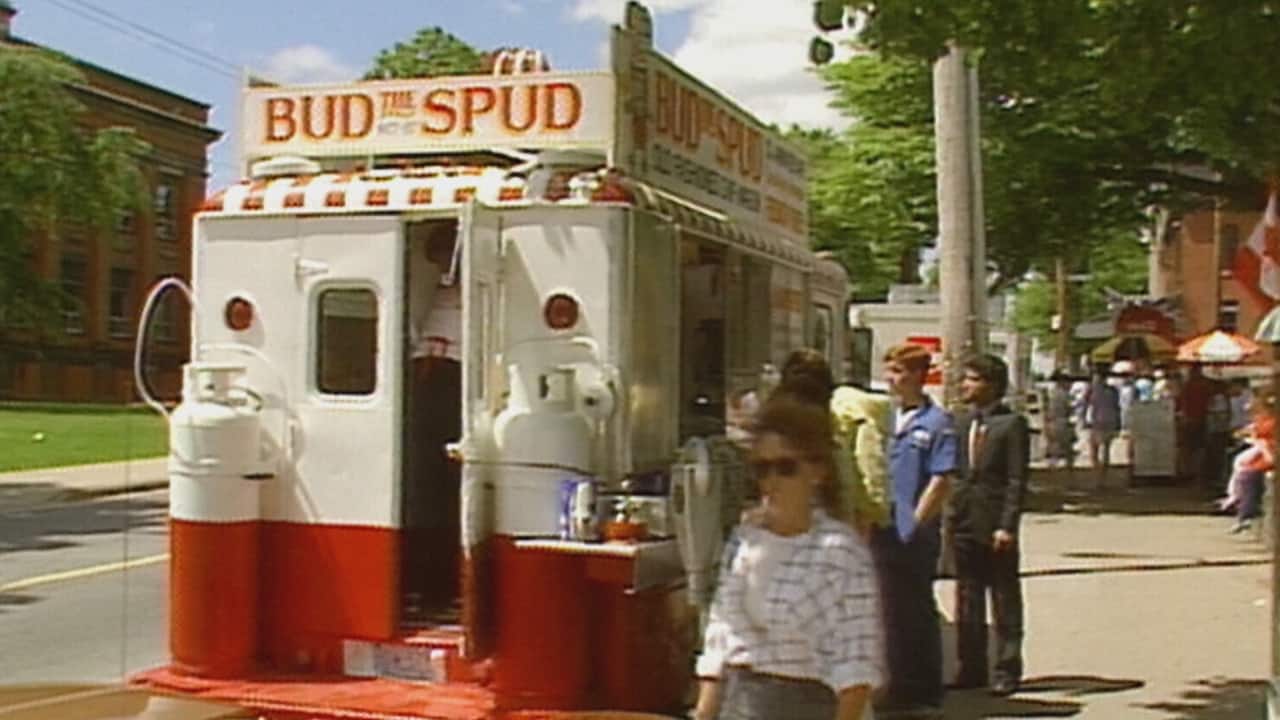 33 years agoVideo
2:16
A potato-chip maker suspends production due to substandard spuds in 1987, but chip wagon customers love them. 2:16

For Nova Scotia chip makers, the potatoes that were their raw materials in 1987 were a bad news/good news kind of story.

"Millie's potato chips has had to close down a couple of times," said reporter Deborah Waters on the CBC Halifax local news early that summer.

Cool weather and heavy rains had been bad news for Millie's, compromising the 1986 crop so that those potatoes that did grow hadn't stored very well.

"Ordinarily, what they try to do in storage is fool the little critters into thinking they're asleep," explained Brian Shore, founder of Millie's Hand Cooked Potato Chips. "But this year, in February, they started to break down."

According to reporting by CBC, Shore's company was named for the wife of an ex-partner. He'd started the business in 1982, after his construction company went bust and he'd been selling pretzels on the street.

Standing in front of his factory, he told Waters the starch in the 1986 crop of potatoes prematurely turned into sugar.

"The entire Canadian crop was pretty well wiped out for the chippers by middle of March," Shore went on.

He'd had to halt production for 10 to 12 days that April — not for a lack of potatoes, but for what happened in the cooking process.

"Our customers were complaining about the dark colour of the chips," said Shore.

Unwelcome by Hostess, too

Even Hostess, a well-established potato chip brand, was having trouble with darker chips, and had started importing potatoes a few weeks earlier.

Shore, too, had tried importing potatoes for his factory, but they were "expensive and hard to find," said Waters.

The Millie's factory was shut a second time, and he was using the closure window to move operations from Halifax to Dartmouth.

In Halifax, those same potatoes were good news to a different type of chip maker — for french fries.

As the proprietor of a downtown chip wagon that included his own name while referencing a Stompin' Tom Connors song, Bud True wasn't one to turn up his nose at the potatoes available to him.

"At Bud the Spud, the darker they turn out, the better," explained Waters.

As True and his crew shook fry baskets and took orders from inside their white chip truck, True explained the potatoes' appeal.

"This is really excellent for the customers. They love it," he said. "You don't have to put salt, vinegar or ketchup on them."

Even though the sugar content of the potatoes had proven "tremendous" for True, it wasn't necessarily going to last.

"But even Bud the Spud may have trouble getting potatoes in a week or so," said Waters. "Because last year's crop is almost gone."

Millie's Hand Cooked Potato Chips ceased operation in 1989, according to reports in the CBC archives.