Lots of people were watching when Brian Mulroney made his debut in the House of Commons in the fall of 1983.

Pierre Trudeau tried to roast his opponent, but the opposition leader was ready to clap back 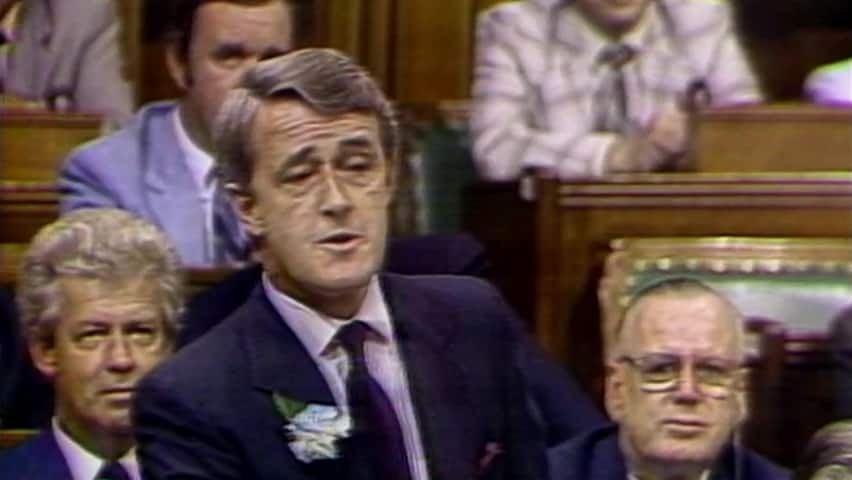 37 years ago
2:48
Brian Mulroney's first day in the House of Commons led to some memorable remarks from himself and from Prime Minister Pierre Trudeau. 2:48

There was a lot of laughter in the House of Commons, but some cynics might have wondered how much of it was genuine mirth.

Thirty-seven years ago, Brian Mulroney was making his debut in the chamber as an elected MP on Sept. 12, 1983.

The PC leader since June, Mulroney had just won a seat in the House of Commons via a byelection in Nova Scotia the previous month.

His first day in the building as an MP was one that drew a lot of fanfare, along with a standing ovation from his parliamentary colleagues.

"The standing ovation from all sides of the house is loud and long," the CBC's Jason Moscovitz reported on The National that night, as viewers saw footage of the incoming leader being applauded.

After that, however, the welcome took a sharp turn when Prime Minister Pierre Trudeau spoke to Parliament about Mulroney's arrival.

"The member for Central Nova has come a long way from that log cabin in Pictou County," Trudeau said, drawing laughs from his dig at Mulroney, whose election to a seat in Nova Scotia evidently seemed to the prime minister to be far from his life as a well-connected lawyer in Quebec.

"I see he has put away his rumpled trousers and odd sweaters to be brought out again at the next election."

"But this, Madam Speaker, has been an occasion to talk about the man, rather than about the policies, so you will understand that I have gone on a little longer than otherwise would have been possible," said Trudeau.

'I defended you, sir, regularly'

Then came the retort from his opponent.

"The Liberal candidate in Central Nova persistently referred to a candidate from Quebec who didn't live in his riding and lived in a $1-million house, rent-free, and I defended you, sir, regularly," said Mulroney, flashing a grin as he delivered his punchline.

The PC leader then seemed to take aim at his intent to be sitting in the prime minister's office one day himself.

"The prime minister announced that he's not a quitter," said Mulroney. "I want you to know, sir, that we're behind you all the way."

A year later, Mulroney would become prime minister, when he led the Progressive Conservatives to power.

He wouldn't get a chance to defeat Trudeau at the polls, however, as the longtime Liberal leader stepped away from politics ahead of the 1984 election.

It was his successor, Prime Minister John Turner, who was leading the party when they were defeated by the PCs.