When Stephen Harper first led the Conservatives to power

A federal election in January 2006 saw Stephen Harper lead the Conservatives to power. 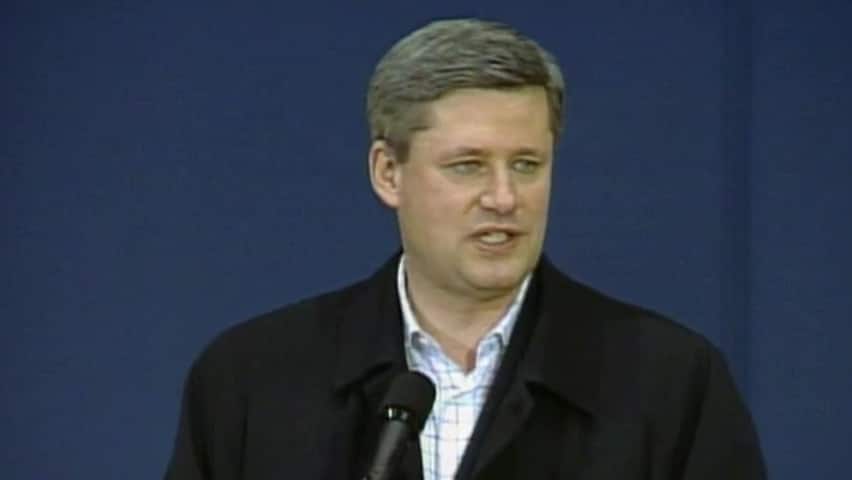 A new PM and a new minority government

Prime Minister Stephen Harper first led his party to power 15 years ago, when a trip to the polls led to a reversal of fortune in Ottawa.

The election of Jan. 23, 2006 saw the Conservatives win the most seats, but not a majority government.

Still, the prime minister-elect signalled on election night that he expected to govern with the same priorities he had campaigned on.

"Tonight, friends, our great country has voted for change. And Canadians have asked our party to take the lead in delivering that change," Harper told a crowd of cheering supporters in Calgary.

"To Canadians I say this: We will honour your trust, we will deliver on our commitments."

Liberals back to the opposition benches

That same election outcome sent the Liberals back to the opposition benches, less than two months after their own minority government was forced to call an election.

The loss at the polls prompted Paul Martin to resign as Liberal leader, as the election brought 12 years of Liberal rule and his own time as prime minister to an end.

The day after the election, the focus of The National's lead story was how Harper and the Conservatives would need to govern to stay in power, given the challenges a minority government faced.

And there were lots of current and former politicians willing to dish out advice on that point.

'Canadians want it to work'

Preston Manning told The National his read on the minority government situation was that "Canadians want it to work."

Conservative MP Peter MacKay said the party would need to bring forward a budget that reflected some of the things the Tories had campaigned on.

"I think it will bode very poorly for anybody who is obstructionist or plays too partisan a game," said MacKay, who was then the deputy leader for the Conservatives.

But Monte Solberg, a Conservative MP for the Alberta riding of Medicine Hat, warned against seeing the party behave "in an arrogant way" after sitting on the outside of governance for some time.

"We know we're duty-bound to work with these other parties," said Solberg.

A minority, not a majority

Deborah Grey, a former Reform, Canadian Alliance and Conservative MP, said she thought Harper would learn from having seen how Martin, his Liberal rival, fared in a minority government setting.

"He won't pretend he's governing with a majority," she told CBC Radio's The Current, when speaking to the program the day after the election.

The 2015 election brought change again when the Harper-led Conservatives became opposition members as the Justin Trudeau-led Liberals won a majority government. Harper stepped down as leader and then left Parliament the following year.