Whether viewers wanted to groove to the sounds of an all-star jazz disco band or remember the top news stories of the past decade, CBC had it all covered when ringing in the 1980s.

And two of the best known personalities from CBC's news division were there right with them: Knowlton Nash of the flagship news broadcast The National and Barbara Frum of CBC Radio's current affairs must-listen show As It Happens.

Like any good New Year's Eve party, Oh What a Feeling: The 70's featured a live band and dancing.

But this was a CBC News production, and reporters including Peter Kent, Joe Schlesinger, David Halton and Peter Mansbridge were also on hand to talk about the biggest stories of the 1970s.

"Well, the '70s might have been fun, but they were also a time of trauma," said Nash, setting up Schlesinger's package on what was then a relatively new phenomenon: international terrorism.

What followed was a recap of stories starting with the October Crisis in Quebec and events over the decade in Jordan, Israel, Germany, Uganda, Somalia, the Netherlands and Northern Ireland.

Then it was onto a performance by opera singer Maureen Forrester and the first of several comic bits by radio host Allan McFee.

There was a package on the oil crises of 1973 and 1979. Then pianist Oscar Peterson, "Canada's greatest jazz export," as Nash described him, played a selection to great applause before Frum teed up a recap of the political drama in the United States culminating in the resignation of Richard Nixon.

Rich Little, a Canadian whose impressions of political figures earned him many appearances on The Ed Sullivan Show, was on hand with pre-taped interpretations of Nixon and Pierre Trudeau, among others.

In Canada, one of the biggest ongoing stories of the '70s was inflation.

The show continued in this way — hard news interrupting light performances and guest appearances — and then actor Gordon Pinsent, in a tuxedo, confronted Frum to tell her she was late ringing in the new year.

It was already midnight in Newfoundland, Pinsent's home province, after all.

"I guess you want me to hang around now until you celebrate yours around 1:30," he told her.

Lest you forget this was a production of CBC News, the staff at the network had prepared an obituary reel highlighting all the deaths of global political figures in the '70s.

If that wasn't sobering enough, Peter Kent was ready with a discussion of the Vietnam War and pictures of bombing raids, refugee camps, and the American pullout.

"It was a moving piece of film, but left [lounge singer Tommy] Ambrose with the unenviable task of lifting the viewer out of the downer," said a next-day Globe and Mail review of the show. 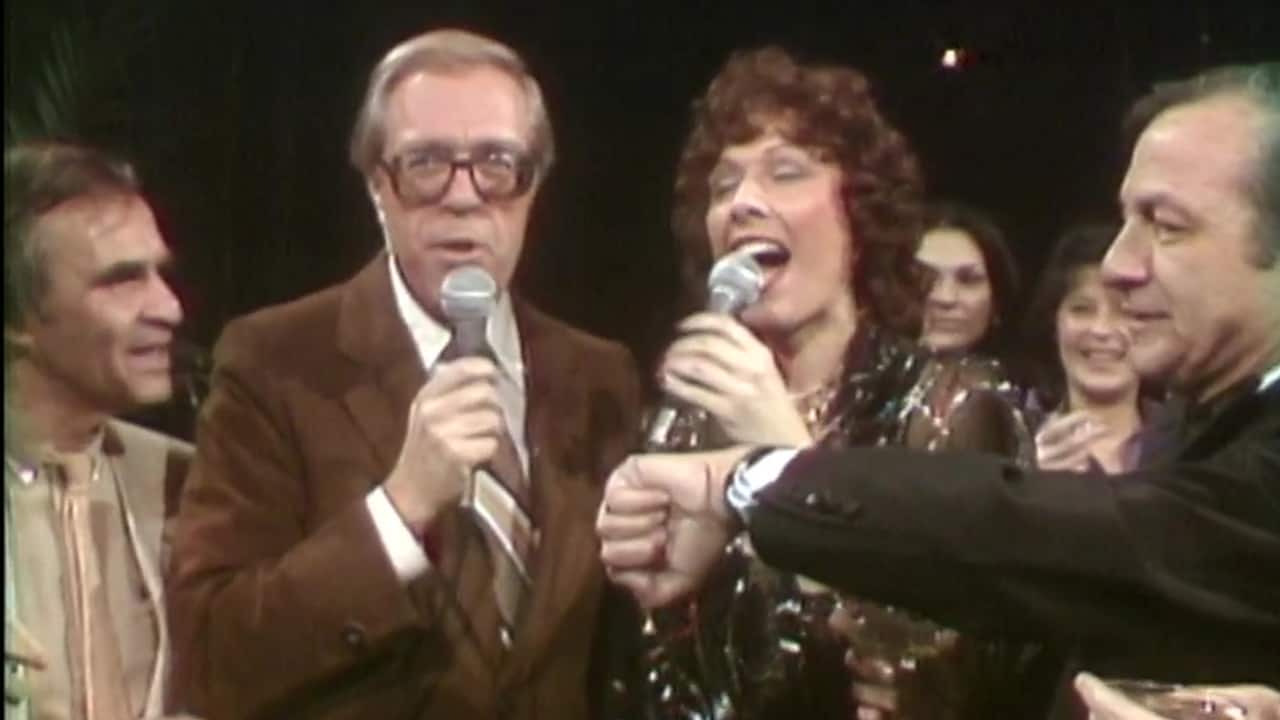 Eventually the show reached the countdown to midnight after an abbreviated version of The National.

Frum and Nash were joined by Joined by former cabinet minister Bryce Mackasey and Johnny Wayne and Frank Shuster of the eponymous comedy duo.

"Very overjoyed to be here," said Shuster. "This is quite a party."

Peter C. Newman, then-editor of Maclean's magazine, was called up and was almost unrecognizable without his trademark Greek fisherman's cap.

"I've got a minute after 12," said Shuster after more chatter, showing Nash his watch.

The motley group began a countdown as the numbers flashed on the screen.

"Happy new year and happy decade, everybody!" said Nash, before the band started the opening notes of Auld Lang Syne.