In 1960, Britain was coming out of a period of post-war austerity, and a princess bride was a welcome excuse to pull out all the stops.

The Queen's only sibling was marrying a commoner, but her May 6, 1960, wedding was still fit for a princess

In early May 1960, London was in the midst of preparations for the upcoming marriage of Princess Margaret, the only sister to the Queen, to Antony Armstrong-Jones.

Her husband-to-be was a photographer and also a commoner — two things that made him a unique addition to the royal family tree.

Reading from the official program for the event, CBC reporter Don Gordon noted the groom's biography included a statement "conceding the rather unusual nature of this royal marriage."

"The alliance of an artist with the Royal Family is something new in its modern history, an enrichment of its capacity to represent every facet of life in the Commonwealth," he quoted.

Only a few years before, the details of the princess's quashed romance with the divorced Peter Townsend had been fodder for newspaper headlines.

But now the country was celebrating her upcoming wedding and many Britons were eager to do so.

The 1947 wedding of her sister, the Queen, had been marked by some of the constraints of post-war Britain.

Thirteen years later, it seemed that the country was pulling out all the stops for this royal wedding.

Only one example of this was the reported £26,000 — more than £588,000 today, with inflation factored in — that the Ministry of Works was spending on decorations.

This was, Gordon noted, a "sharp contrast" to the £6,000 budgeted by the same ministry for the wedding of her sister Princess Elizabeth, the then-future queen.

The union of Princess Margaret and her groom was the first royal wedding to be televised, but there was an expectation that huge crowds would turn out to see the procession to and from Westminster Abbey.

The Globe and Mail reported on May 3, 1960, that "more than 6,000 policemen" would be stationed along Princess Margaret's wedding route for crowd control.

There were another 800 to be assigned to direct traffic that morning.

Grandstands were being erected, reported Gordon, to "accommodate some of the thousands of spectators expected — for a price though."

A company representative told him that the stand in front Westminster Abbey would hold approximately 2,000 spectators. 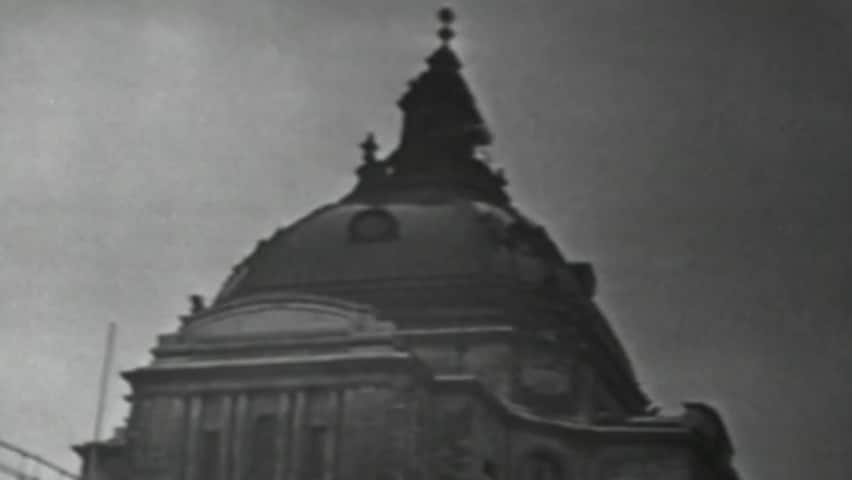 2 years ago
1:55
Preparations for the upcoming wedding included the erection of grandstand seats for some lucky - and wealthy - spectators. 1:55

"You mentioned a top price of 25 guineas, that's almost $75 in Canadian money — what sort of people will buy a ticket at that price?" Gordon asked.

"Oh, various people, titled people etcetera, the ordinary public, they seem to be coming for these prices and booking them ad lib," the representative said. (The top price of $75 would translate roughly to $650 in 2019.) 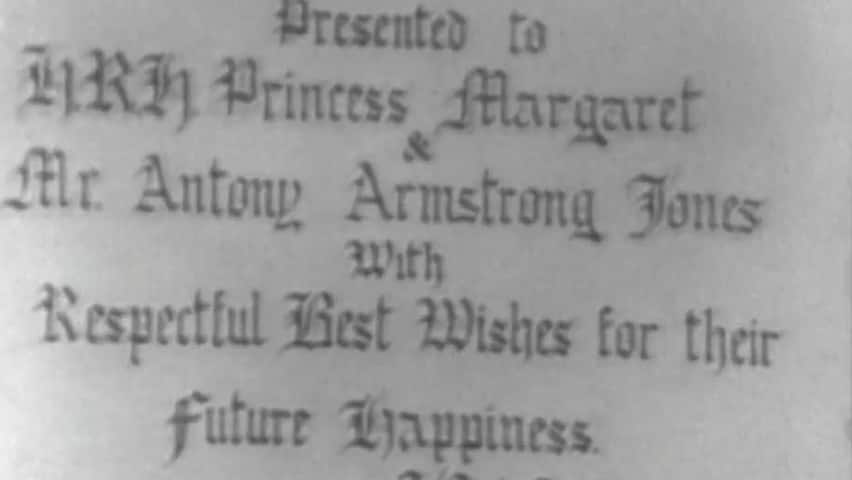 One of the many wedding cakes for Princess Margaret

2 years ago
0:31
A war veteran puts the finishing touches to one of the 12 cakes to be served at the Royal wedding. 0:31

Viewers were given a close look at one of what was reported to be one of 12 wedding cakes that would be served at the reception.

The one shown on CBC-TV was prepared over the course of three weeks by an instructor at the Army Catering Corps School with ingredients that included 96 eggs and 3.6 kilograms of butter. It weighed in at a whopping 75 kilograms and bore the greeting "Respectful Best Wishes" for the "Future Happiness" of the couple. 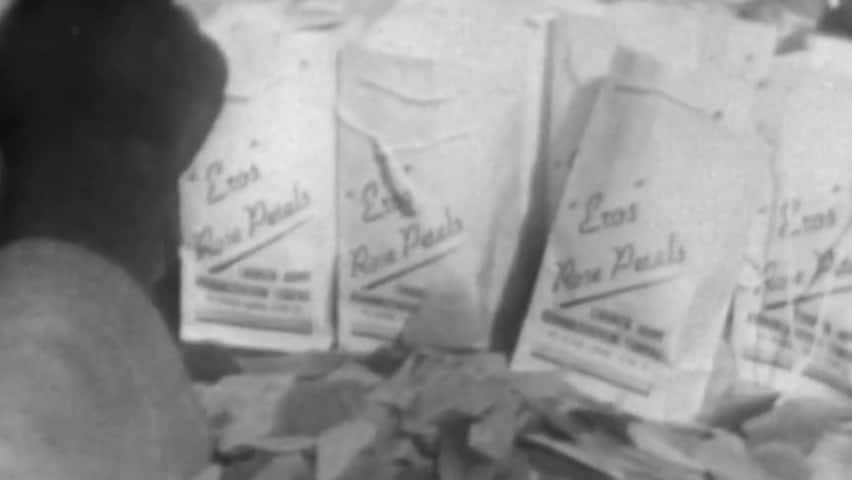 2 years ago
0:33
The petals for the bride and groom's walk must be carefully tinted to make sure they won't stain the gowns. 0:33

Proof that no small detail was left to chance, CBC's Newsmagazine told viewers that petals "to be strewn before the bride and groom" were being carefully hand-tinted by disabled war veterans at a London rehabilitation centre.

This method yielded paper petals that would not stain the royal gowns. 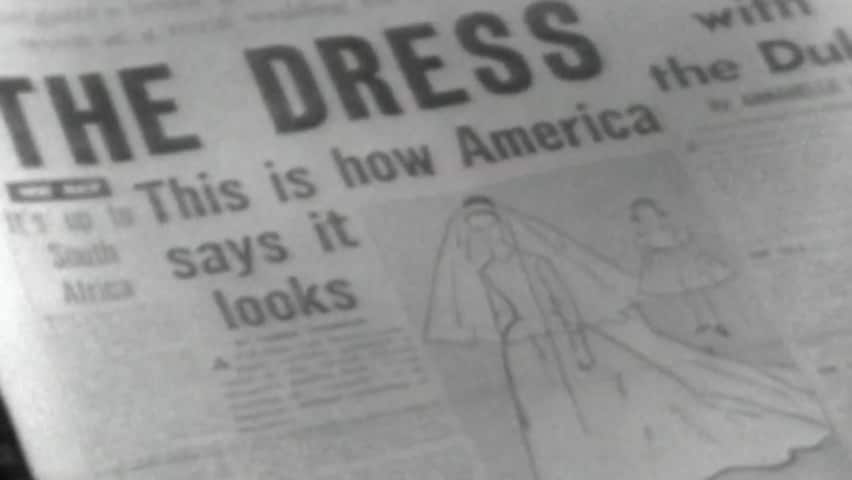 2 years ago
1:06
London newspapers expressed doubt about the U.S. newspaper claims to having details on Princess Margaret's wedding gown. 1:06

And, as was to be expected, there was great anticipation for the reveal of the wedding gown.

Just days before the event, London daily newspapers published reports that the U.S. newspaper Women's Wear Daily had revealed detailed descriptions of the bride's dress and those of her sister, her mother and the wedding party.

Princess Margaret's was described as "a monastical design ... with a modest v-neckline and three-quarter length sleeves."

The dress was being designed under secrecy by royal dressmaker Norman Hartnell and did prove in the end to be simple and similar to reports.

At the time of the leak, Hartnell was quoted by the London Daily Herald saying that "they must be working on conjecture … the real details could not have been disclosed by any source known to me."

The Toronto Star reported on the day of the wedding that "the royal wedding dress was no surprise, for it closely resembled advance reports" and the silk organza was not very embellished "with embroidery and other trimmings."

The day itself was reported by CBC Radio as "a day of glittering sun-drenched pageantry which brought out the biggest crowd which London has seen since the coronation."

The wedding was attended by more than 2,000 guests, which CBC Radio reported ranged from the Queen of Denmark to Armstrong-Jones's "charlady" —  or cleaning lady.

And the 2,000 grandstand seats outside the Abbey were indeed filled.

It was estimated that one million people lined the procession route. CBC Radio reporter Charles Taylor described the city as still celebrating at midnight, long after the couple had sailed away on the "newly painted Britannia" for a honeymoon in an "undisclosed" Caribbean location.

Within a few years, the princess and her husband had two children, a son in 1961 and a daughter in 1964. Armstrong-Jones had the title Earl of Snowden conferred on him in 1961.

After reports of extramarital affairs, however, the two separated in 1976 and divorced in 1978.