How CBC picked up on the podcasting phenomenon

A new medium in audio was "spreading all over the internet" in 2005, and the CBC was right there with it.

Described as a cross between blogs and broadcasting, the medium took off in 2005

Podcasting: a new way to be heard

16 years ago
3:08
Reporter David Common learns about a new audio trend for CBC's The National. 3:08

You could practically hear quotation marks when Diana Swain, hosting CBC's The National in the spring of 2005, introduced a report about a new trend in audio and the internet: podcasting.

"Got an urge to speak your mind and reach an audience?" asked Swain on May 13, 2005. "You might want to think about creating a 'podcast.'"

Swain said podcasting could be described as "where broadcasting and blogs meet." And it was "spreading all over the internet."

Reporter David Common brought viewers up to date on what he said was the latest "shift in the sharing of sound" in a century.

And it was something that the CBC had already begun exploring.

Not for professionals ... yet

"It's still the domain of hobbyists and amateurs for the most part," said Cross. "But the technology, and the software that you have to use for it, is becoming much more user friendly."

Podcasting was different from broadcasting in the sense of who could produce programming, said Common. When and where users could listen was also different.

A computer, a microphone, "some basic software" and a topic were all that anyone needed to make a podcast, he said.

As the Globe and Mail had noted in an item on podcasting in March 2005, two months before Common's report, "public broadcasters around the world are catching on fast."

It said that the CBC had begin a pilot project to distribute two programs via podcast: the science-focused Quirks & Quarks and a weekly technology column by correspondent Tod Maffin. 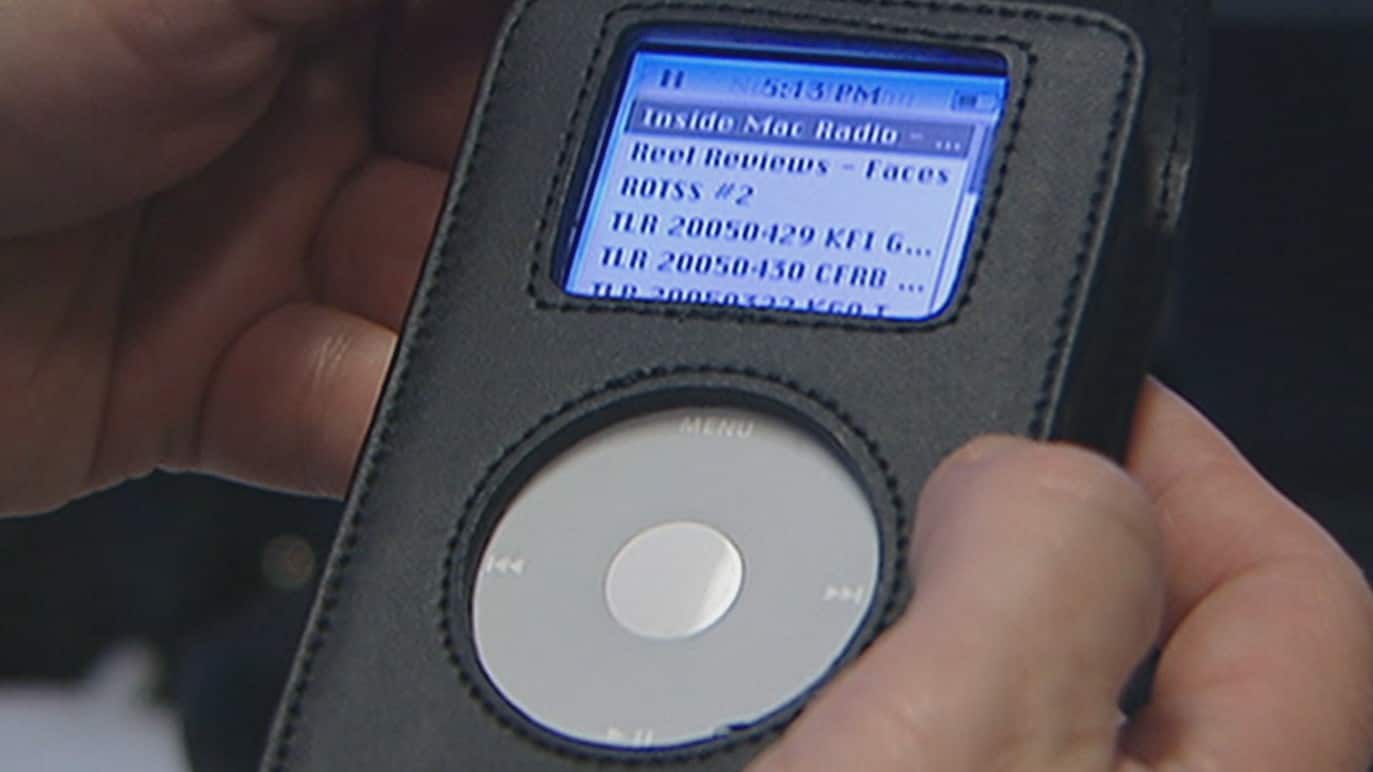 The newspaper went on to say that one of the primary differences between podcasting and audio made by "any old Joe" was that podcasts could be made available by subscription, with an automatic download — analogous to a newspaper subscription.

According to the Globe, "maybe" 20 podcasts had existed in August 2004, when the software became available. At the time of the article, seven months later, there were "more than 2,000 podcasts" were available.

In his report, Common put the number of podcasts at triple that number, or 6,000.

The downloads could go directly to a portable player, "such as the immensely popular iPod," said Common. "That's where podcasting gets its name." He added that "former MTV star" Adam Curry was credited with creating podcasting.

For Cross, listening to audio "on your own time" was one of the most appealing aspects of podcasts, which he described as a "very hot, very exciting, very innovative" way of reaching people.

Months before viewers of The National learned about podcasting, CBC Radio listeners heard about it from Maffin, in October 2004.

"Podcasting is evolving out of the blog trend, short for weblog — sort of an online diary," said Maffin, who compared podcasting's automatic download feature to "a VCR that tapes your favourite programs overnight while you sleep."

Maffin envisioned a future for podcasting that could transcend radio stations.

"It's entirely possible some of the better podcasters could actually attract advertisers," he said.

Beyond the CBC's two podcast experiments, the public broadcaster had its eye on the possibilities of podcasting.

"Young people aren't listening to radio like they used to," CBC programmer Krista Harris told Common. "Generation X is all about, 'I want to listen to what I want and when I want, where I want.'"

While podcasts might never replace traditional radio, Common wrapped his report with an acknowledgement that radio stations, including the CBC, were "creating special content for podcast alone."

Digital Archives5:55The possibilities of podcasting
In 2005 columnist Jesse Hirsch talks to Metro Morning host Andy Barrie about podcasting, a new medium that has potential to become a tool for advocacy. 5:55

Hirsch said one example was how it could offer a different perspective during labour disputes.

"When you have the actual rank and file having the ability to reach the public in a very large way... that really changes the nature of the debate," he said.

"You can listen to this regardless of the internet, whether on the subway or in the car or walking down the street," he said. "That really expands the potential audience, and makes it easier for internet radio to not be some sort of techno-centric-nerd type of activity, but something that is pop culture."

In 2021, the CBC has a long roster of original podcasts, acquired podcasts, and podcast versions of its radio programs.