The plastic wrapped around some of Canada's most valuable artworks wasn't there for an artistic purpose. 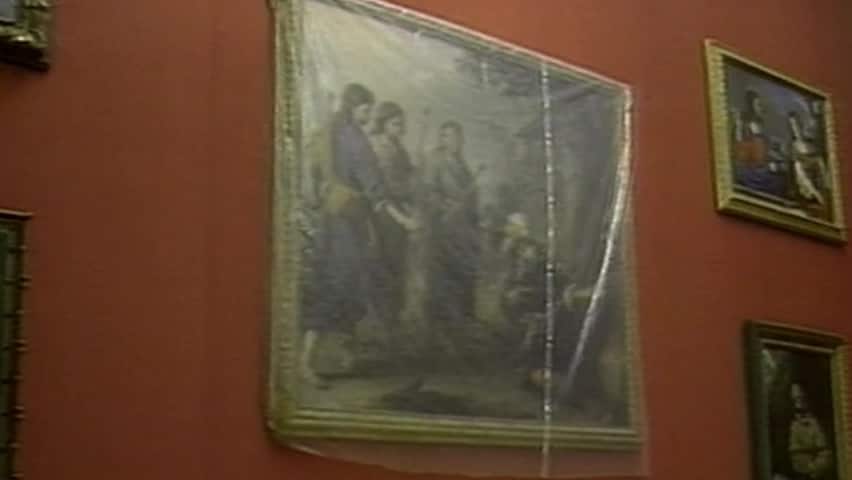 Protective plastic at the gallery

32 years agoVideo
2:04
The National Gallery of Canada placed plastic on top of art works sitting under skylights, when condensation started dripping down. 2:04

It wasn't a comment on the way we package or present art in museums and it wasn't there for any artistic purpose.

No, the clear plastic wrapped around the valuable paintings and sculptures at the National Gallery of Canada in early 1989 was there for just one reason — to protect the artwork sitting below the skylights.

A condensation issue had emerged during the first winter of the new gallery, as the cold weather put the building's design to the test.

"Sudden cold snaps have caused such a quick buildup of condensation on skylights that exhibits in the two courtyards and in the baroque gallery have had to be covered to protect them from water drops," the CBC's Eric Sorensen explained to viewers on The National on Jan. 9, 1989.

The Toronto Star reported that some art in the contemporary American gallery had also been put under plastic, including Barnett Newman's Voice of Fire painting.

Don Boudria, then the Liberals' public works critic, suggested the new building was putting the country's art collection at risk.

"The treasures are not protected properly because of this fault that we have in the design," he told CBC News.

But according to what The National reported, the problem had actually been anticipated. That's why the gallery's roof had tripled-glazed glass and the ceiling was equipped with heaters.

And the conditions inside the building were monitored by computer.

However, Sorensen said that "with a sudden cold snap, the heating and ventilation system couldn't respond quickly enough" to the condensation-related issue.

Museum staff said the building was not flawed. Instead, it was a consequence of getting used to the conditions in the new building.

Sorensen said a group of architects and engineers would soon be visiting the museum to "try to solve the riddle of how to keep a warm, glass building from steaming up during cold Ottawa winters."

Over the years, news reports have indicated that the gallery has had recurring issues with water and leaks from its roof.

In April 2005, The Canadian Press reported that various patches had been used "to prevent leaks from damaging art in display and storage areas."

In March 2013, a report in the Ottawa Citizen described a $9-million project that was to replace more than 1,400 windows in the building's great hall, where the paper noted leaks had been occurring for years. Other roof-related repairs were also being tackled as part of that project.