A different kind of hockey fight

A proposed mural for the subway station at Maple Leaf Gardens in 1984 depicted both the home team and their rivals, and it had Harold Ballard seeing red.

Leafs owner Harold Ballard resented the Habs, even when depicted in art 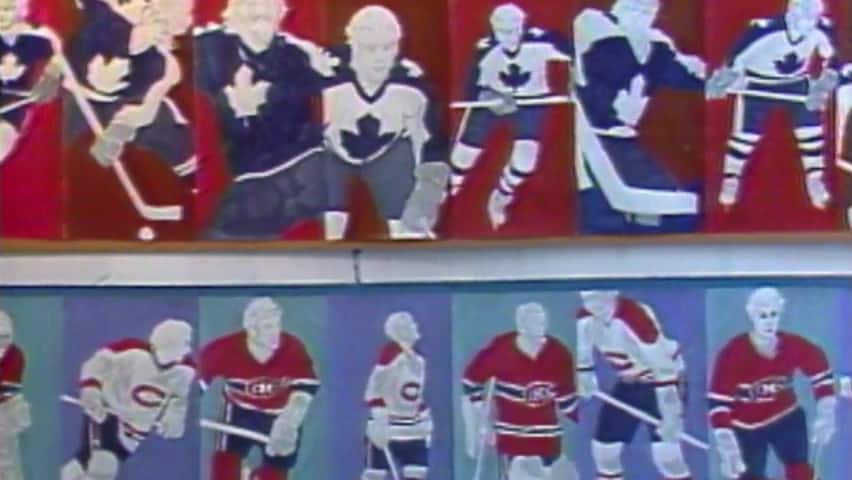 Hockey Knights and Harold Ballard in the Toronto subway

37 years ago
1:58
A mural for the subway station at Maple Leaf Gardens has the team's owner seeing red. 1:58

Public art can be a divisive topic.

But on July 27, 1984, CBC's The Journal reported there was only one person objecting to a piece commissioned by the Toronto Transit Commission for its College station. That person was Toronto Maple Leafs owner Harold Ballard.

As the station closest to Maple Leaf Gardens, it only made sense for the murals lining the platforms inside to have a hockey theme. But Ballard saw red when he got a glimpse of what artist Charles Pachter had designed: a piece he called Hockey Knights in Canada, Les Rois de l'Arène.

It depicted hockey players in the blue-and-white uniforms of the Leafs along one platform. On the opposing side: the bleu, blanc et rouge of the Montreal Canadiens.

If the TTC insisted on including the Habs in the artwork, Ballard threatened not to allow the Leafs' distinctive logo to be used. But the TTC's position was that it was not in violation of copyright laws.

Artist Charles Pachter, known for his Canadian-themed paintings such as Queen on Moose, designed the 35-by-seven-foot murals after approaching the TTC with the idea.

"[Ballard] is being a bully," Pachter said. "The Leafs being in the condition they're in, it's good press for him." (The Leafs had suffered another dismal season, failing to make the 1984 playoffs.)

Regardless of Ballard's motives, Pachter took the matter seriously. "The issue is an important one, and that is artistic freedom," he said.

Ultimately, the $66,000 murals were unveiled to the public in College station in April 1985 — exactly the way Pachter created them. Former Habs goalie Ken Dryden, on hand for the event, said they were "a reminder of an historical rivalry."