Government apologizes for residential schools in 2008

In the House of Commons, Prime Minster Stephen Harper delivers an apology to residential school survivors and all Indigenous people.

Indigenous leaders, survivors witness speech on the floor of the House of Commons 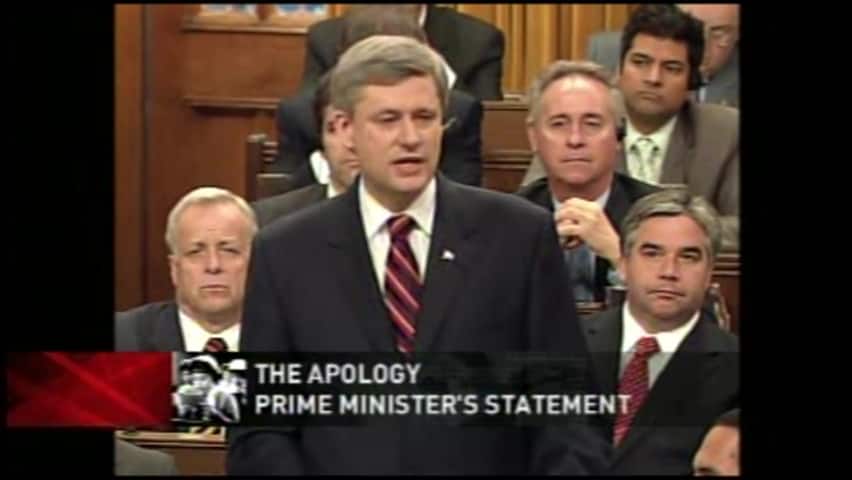 13 years ago
2:54
In Parliament, Prime Minister Stephen Harper delivers an apology to residential school survivors and all Indigenous Canadians. 2:54

In this live special broadcast from CBC Newsworld on June 11, 2008, then-prime minister Stephen Harper is heard recognizing the wrongs of the past.

"The government of Canada sincerely apologizes and asks the forgiveness of the Aboriginal peoples of this country for failing them so profoundly. We are sorry," Harper says, delivering the apology in the House of Commons.

Harper's apology was followed by remarks from Stéphane Dion, then the Liberal leader, who acknowledged his party's complicity in the residential schools policy, having governed Canada for 70 years in the 20th century.

Two more federal party leaders, Gilles Duceppe of the Bloc Québecois and Jack Layton of the NDP, reflected on the apology and rebuked the Harper government for not endorsing the United Nations Declaration on the Rights of Indigenous Peoples.

From a circle of 11 chairs on the floor of the House of Commons for five Indigenous leaders and six residential school survivors, Phil Fontaine, national chief of the Assembly of First Nations, responded to the apology to cheers from the viewing galleries.

"Never again will we be the 'Indian problem,'" said Fontaine. "Today is the result of the righteousness of our struggle."