From the 1960s to today: Awkward moments between Canadian & U.S. leaders

Canada and U.S. may be both friends and neighbours, but that doesn't mean the two countries and their leaders always see eye to eye.

The two faces of the U.S.-Canada relationship have always had ups and downs

There's no two ways about it: The leaders of Canada and the United States have to put up with one another, whether they enjoy each other's company or not.

That's as true for U.S. President Donald Trump and Prime Minister Justin Trudeau as it was for their many predecessors.

As avid news readers will be aware, Trump recently called his Canadian counterpart "two-faced," but also, at the same time, "a nice guy."

And that seemingly un-presidential snipe came in response to seemingly unflattering comments Trudeau was caught making, which were evidently about the behaviour of the U.S. commander in chief.

The spat was just the latest entry to the list of awkward moments involving American and Canadian leaders who may have preferred to limit the time they spent with the person leading the country on the other side of the border.

Here are just a few chapters in that decades-long story that is still being written today.

'You pissed on my rug'

Before he became prime minister, Lester B. (Mike) Pearson was a winner of the Nobel Peace Prize in 1957.

But when he made a speech accepting a similar prize, the World Peace Award, from Philadelphia's Temple University in 1965, the reaction from his U.S. counterpart was anything but peaceful.

"You pissed on my rug!" Lyndon B. Johnson told Pearson, as retold by journalist Lawrence Martin in his 1982 book, The Presidents and the Prime Ministers.

Johnson was upset by Pearson's speech, which "had denounced Johnson's decision to begin ... the bombing of North Vietnam," said Martin's book. 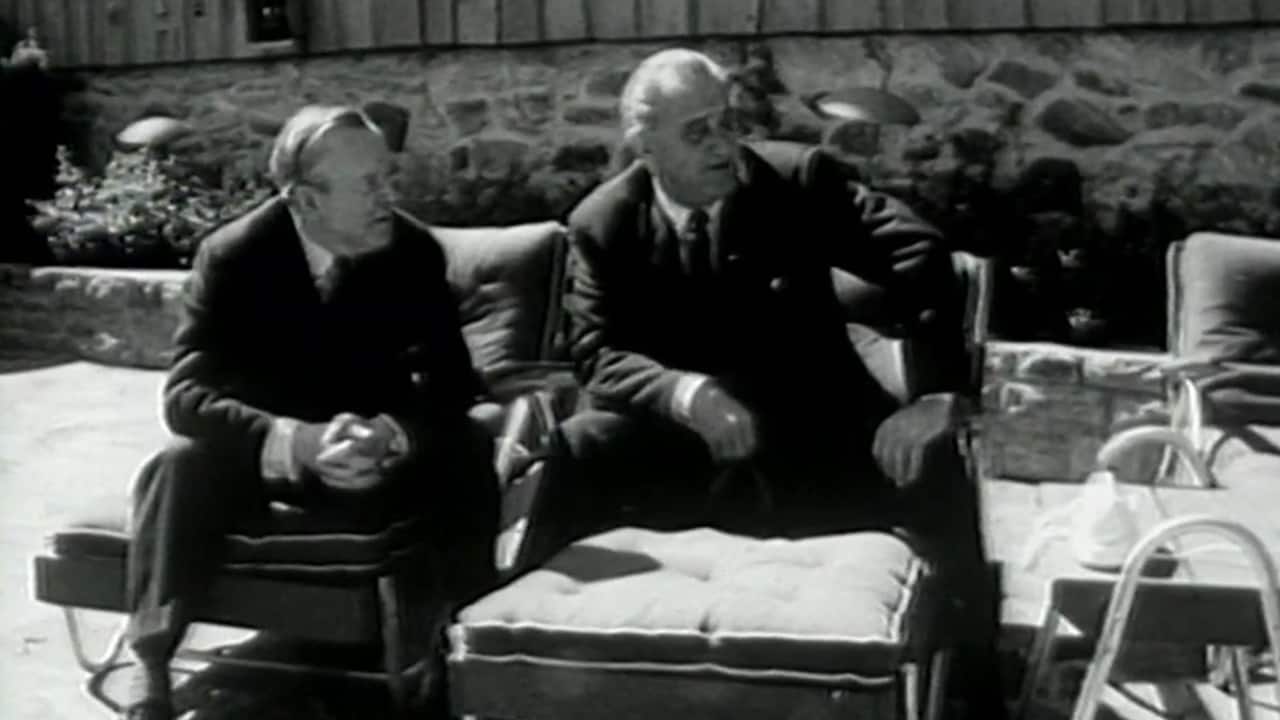 1 year agoVideo
1:07
A report from the CBC's James Minifie gives liitle of rancour between the two leaders. 1:07

A report by the CBC's James Minifie from the following day gave no hint of the division between the two at Camp David.

"Mr. Pearson emphasized the absence of meanness, nationalism, or imperialism on the part of the United States in its intervention in South Vietnam," said Minifie, adding that Pearson had said the Canadian government supported the intervention.

And Johnson was "non-committal," said the reporter, saying it was "not his place to judge what other nations do."

But Martin's book told another story. An enraged Johnson lit into Pearson on an outdoor terrace after lunch at the Presidential retreat Camp David the day after his speech.

As two aides and the Canadian ambassador looked on through a window, Johnson grabbed Pearson by the shirt collar, twisted it, and lifted the Canadian by the neck.

The rancour apparently didn't last, however.

"There was much co-operation between Canada and the United States in many spheres during those years," former ambassador Charles Ritchie wrote in Maclean's in January 1974. "There were ups and downs in the relationship — but the friendship was always dominant."

Not a close friendship

There was a time when Prime Minister Pierre Trudeau talked more often to U.S. President Richard Nixon than any of his global counterparts.

But it's not as if they were pals.

"There's been more frequent communication between him and me than there has been between myself and probably most other heads of state or heads of government," Trudeau said, when asked to describe their working relationship in November of 1971. 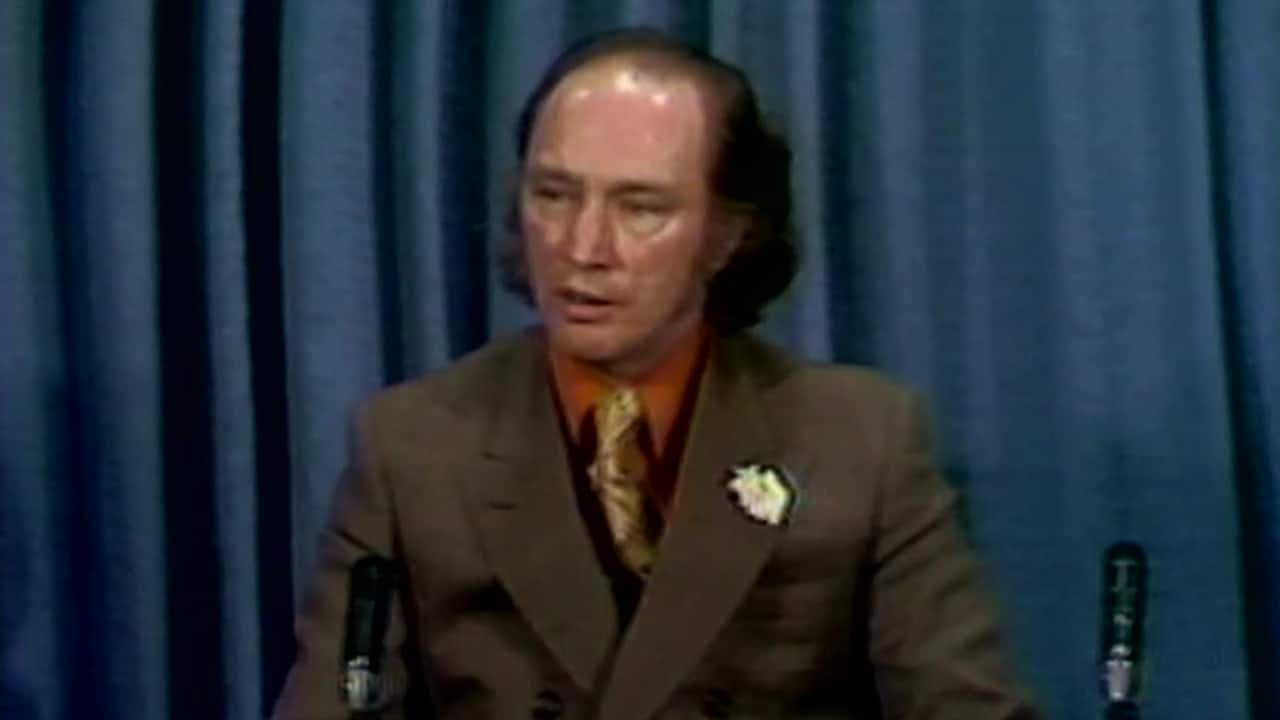 'No different' than with other leaders

Trudeau and Nixon had worked alongside each other for several years at that point, having met for face-to-face meetings on two occasions thus far. They had also exchanged correspondence and talked on the phone occasionally.

Yet Trudeau reported their rapport was "not one of intimacy and great fellowship," though he noted he could not say he was on "very friendly terms with too many people."

And a friendship would not be forthcoming between the two men.

That December, in fact, a telephone conversation Nixon had with Trudeau would be recorded in the Oval Office, along with pejorative remarks about the prime minister that the U.S. president made to staff ahead of the call.

Trudeau would later quip that he had been called "worse things by better people." 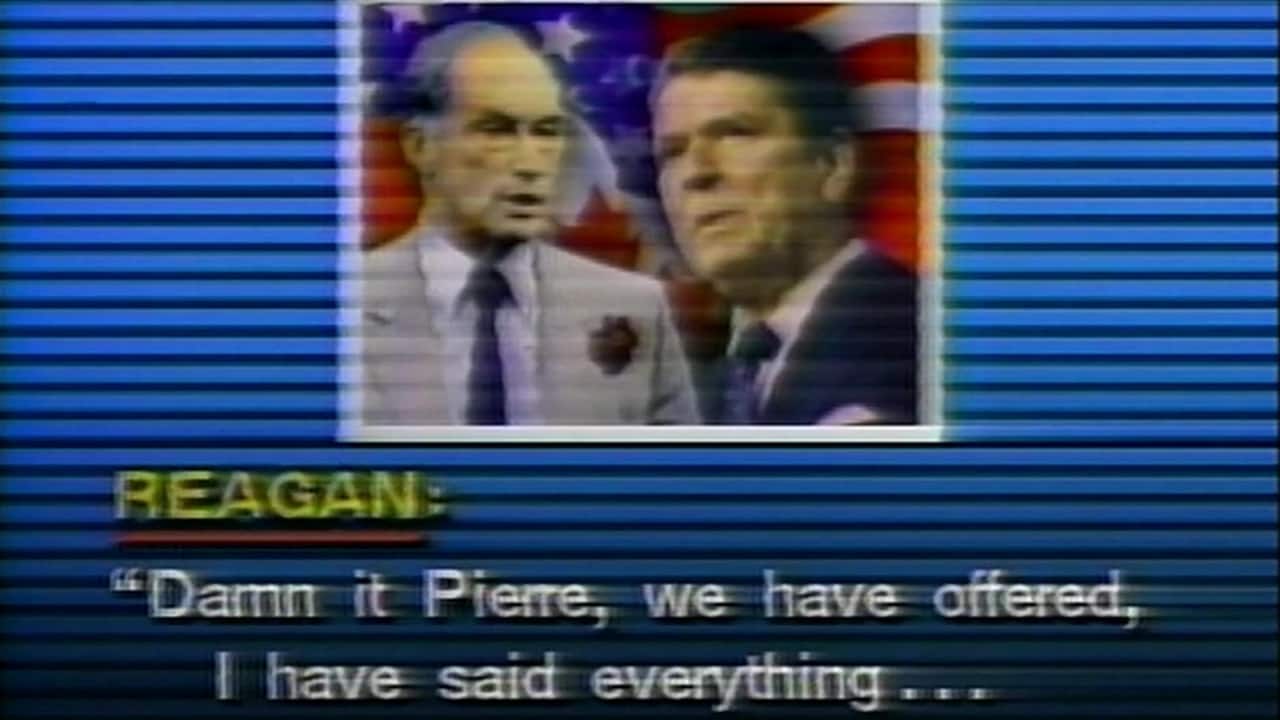 37 years agoVideo
1:43
Ronald Reagan gets frustrated with Pierre Trudeau over the issue of Soviet disarmament. 1:43

The two were gathered with other world leaders at the G7 economic summit in London in June 1984, and the topic on the table was stalled disarmament talks with the Soviet Union.

On The National that evening, host Sheldon Turcott described how Trudeau, returning to Canada, was confronted with reports that Reagan had "really lost his temper" with him.

Reporter Christopher Walmsley took up the thread, noting that the seven leaders had spent just 53 minutes over three days talking about "East-West relations."

"But some of those minutes became heated when Trudeau reportedly blamed the U.S. for the impasse in disarmament talks.

"Damn it, Pierre!" Reagan was quoted as having said. "What the hell more can I do to get them back to the table?"

Trudeau, confronted by reporters after getting off his plane in Ottawa, was just as combative.

"Tell them they're liars," he said, when he was asked about the American version of events.

Instead, he paraphrased the exchange from his perspective. 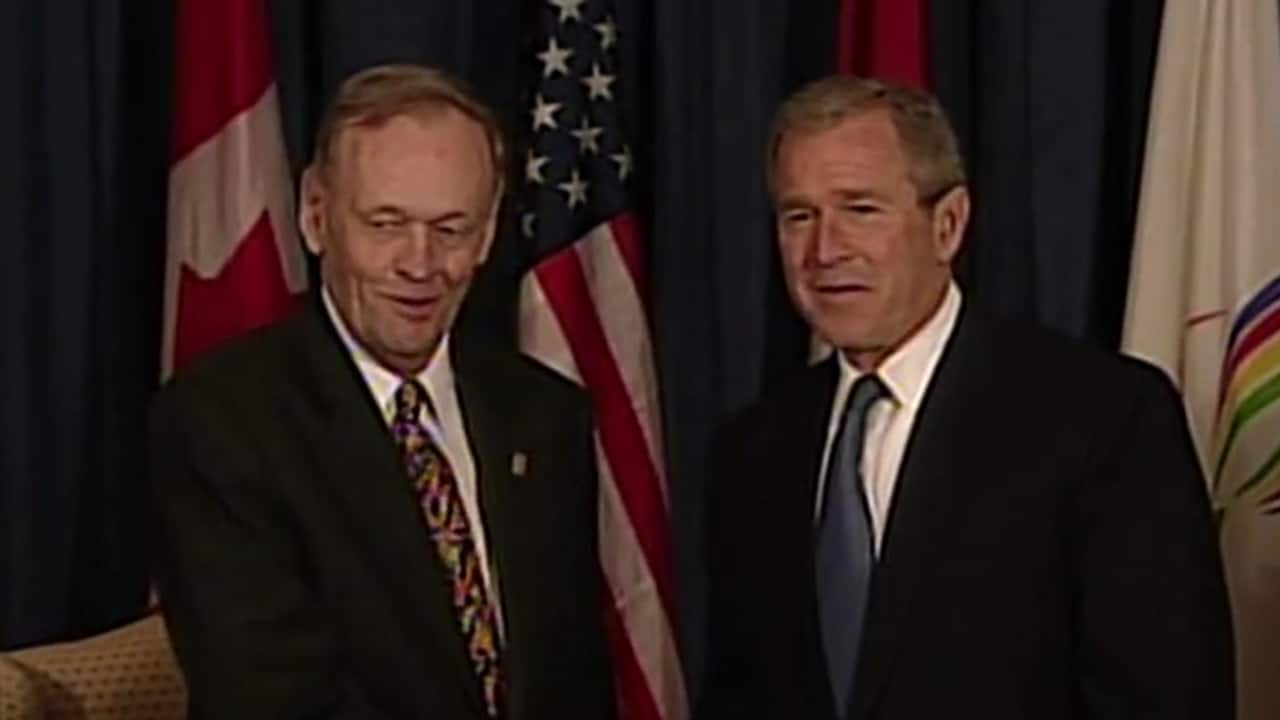 17 years agoVideo
2:09
The relationship between the leaders of the U.S. and Canada appeared to have been under some strain in the early 2000s. 2:09

In January 2004, Prime Minister Paul Martin headed to the Summit of the Americas in Monterrey, Mexico, where there were many things on the agenda — including a very important breakfast meeting with U.S. President George W. Bush.

It was hoped the meeting could help mend the relationship between the leaders of Canada and the United States, which had seemingly frayed during Prime Minister Jean Chrétien's final years in office.

For one thing, Chrétien hadn't supported the U.S. actions in Iraq, which contributed to the perceived tensions with Bush.

But there were also several high-profile incidents where government staff and officials said things that were hard to walk back. These included a government official referring to the U.S. president as "a moron," as well as an ambassador suggesting Canadians would have preferred seeing Al Gore elected president in place of Bush.

For perspective on the state of the relationship between the two countries, The National's Leslie MacKinnon turned to Tom Axworthy.

Axworthy, who once served as Prime Minister Pierre Trudeau's principal secretary, didn't believe the Chrétien-era incidents would alter the character of the Canada-U.S. relationship.

"It's small stuff anyways, small potatoes," he said. "The relationship doesn't change because of a couple of gratuitous incidents."

He appeared to be right: Bush would make his first official visit to Canada at the end of that year.