The CBC's Matthew Halton filed a dramatic account of the Canadians who went ashore at Juno Beach on D-Day.

As Canadians went ashore June 6, 1944, CBC's Matthew Halton was there

For CBC war correspondent Matthew Halton, there was no question who the heroes were on the beaches of Normandy on June 6, 1944.

They were the Canadians who made their way onto and across the sand — young men who fought their way ashore to take on the Germans as heavy machine guns fired on them.

"I shall never forget watching our infantry storm those beaches. Theirs is the glory, the power and the glory," Halton reported back to Canadians, in an early dispatch on CBC Radio about the dramatic events unfolding in France.

"The navy and the air force made it possible — this landing in France — but on the whole, the honours of D-Day go to the assault troops. I've never seen such zest for the attack." 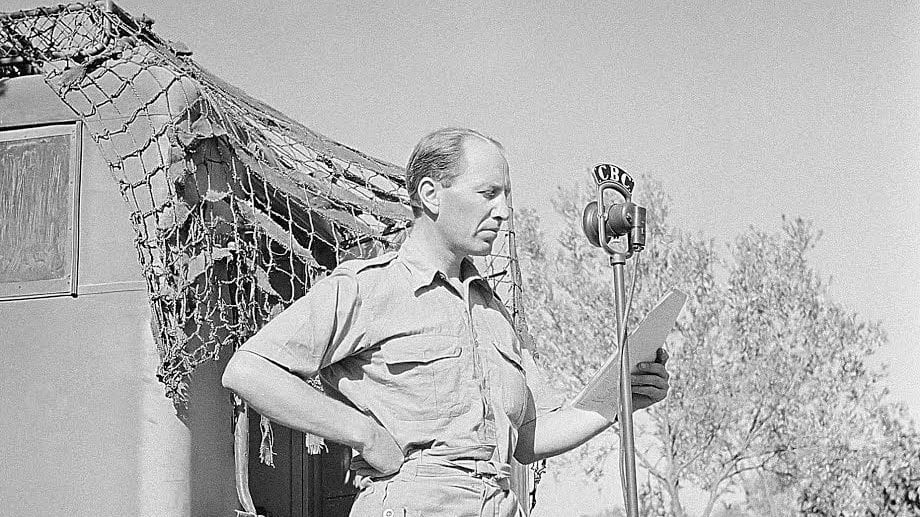 Some 14,000 Canadians landed at Juno Beach on D-Day, joining the more than 150,000 Allied troops who arrived on five beaches in Normandy that day.

Halton described watching the Canadians disembark from the landing craft before "scrambling ashore through the bursting shells."

'We came in from the sea'

Allied planes and ships had done what they could to clear the way for these soldiers, but as Halton explained, it was up to the men heading onto the beaches to finish the job.

"Our ferocious supporting fire, as we came in from the sea … and the terrific bombing had stunned or neutralized some of the beach defences," Halton said.

"But some of them were untouched, and the assault troops had to jump from their landing craft in the heavy, rising tide and storm the positions with a bayonet, through minefields."

Halton added: "These were superb assault troops. Some of them, less than we expected, died on those Normandy sands. But the walls of Fortress Europe were breached."

Some 359 Canadian soldiers died on D-Day, according to an account of the battle on the Veterans Affairs website.