The years go by, but Bob Woodward keeps his eye on Washington | CBC Archives Loaded
Archives

The years go by, but Bob Woodward keeps his eye on Washington

It started in Richard Nixon's day and has continued through Donald Trump's current term in the White House.

From Watergate through to the present, famed reporter has kept an eye on power in America

It started in Richard Nixon's day and has continued through Donald Trump's current term in the White House.

It involves someone powerful getting word that journalist Bob Woodward is working on something that will make a splash. Then comes the wait to see what he's put together and how that will play out in public.

That's because Woodward has routinely delivered detailed accounts of current events built on in-depth research and access to high-ranking sources — presidents, spies and bureaucrats among them.

His latest book, Rage, appears to be no exception: U.S. President Donald Trump is among those who spoke to Woodward about how his administration has handled recent crises including the pandemic that has now killed more than 190,000 Americans.

Rage marks Woodward's second book-length work on the Trump years and it has been making headlines ahead of its official release today.

Long ago, Woodward built his name on the reporting he did for the Washington Post during the Watergate scandal, which is when the world and CBC audience members first became familiar with him.

The burglars got caught breaking into the offices of the Democratic National Committee at Washington's Watergate complex on June 17, 1972 and that was bad news for them.

But it was the start of an epic news chase, for which Bob Woodward had a front-row seat — including in the courtroom where the burglars attended their first hearing related to the case. 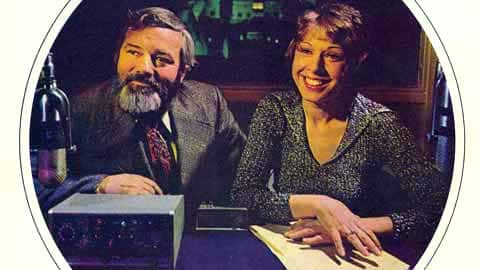 Archives11:36Bob Woodward on the unfolding Watergate scandal
The Washington Post reporter speaks to Harry Brown of CBC Radio's As It Happens on Sept. 18, 1972 to describe the latest development in the Watergate mystery.

Three months after the break-in, Woodward talked to CBC Radio's As It Happens about the sprawling story, which he didn't think would have much effect on the presidential election that November.

"Our political reporters say no," said Woodward, who with colleague Carl Bernstein would later chronicle the full Watergate scandal in All the President's Men.

"It's not a backyard issue, it is not something that involves food prices or jobs or campus unrest and I think there is the feeling or the cynicism among many voters here that you have to deal a little bit under the table, at various times, in order to get the job done and this may be an example of that."

He was right: Nixon won re-election that year. But the president would resign halfway through his second term. More than 20 other people ended up behind bars.

Fifteen years after the Watergate scandal, Woodward was still doing what he did best — doggedly pursuing stories and breaking news.

His fifth book Veil: The Secret Wars of the CIA, 1981-1987 explored the actions of America's spy agency under William J. Casey.

Appointed CIA director by U.S. President Ronald Reagan, Casey held the job until health issues forced him to resign in the final months of his life.

It was at that time that Woodward was in the midst of working on Veil and conducting interviews with the ailing Casey — including while he lay in bed in hospital.

The reporter, who had dealt with Casey throughout his term at the helm of the CIA, said the spy chief wanted his chance to give his side of the story.

"My agreement with Casey, spoken and unspoken, was simply he would get his say," Woodward told the CBC's Barbara Frum, when appearing on The Journal in October of that year.

"He would be permitted to explain his motives and lay it out in detail and so, he gets his say in this book."

A path to war and a possible template?

Bob Woodward on The Commanders

32 years ago
Duration 9:50
In May 1991, Bob Woodward talks to the CBC's Barbara Frum about his latest book, The Commanders.

It would eventually be seen as the first Gulf War, but in the spring of 1991, it was the only war with that name.

The book Woodward delivered that year was called The Commanders and it zeroed in on U.S. President George H.W. Bush, his military commanders and the path that brought a battle to Saddam Hussein's doorstep.

In May 1991, the CBC's Barbara Frum asked Woodward about the implications of a U.S. military that seemed to have a renewed sense of purpose.

"Three years ago, when you began your research [for the book], the American military seemed to have lost its reason for existence, even — the Cold War declining, the threat in Europe declining," Frum said.

Frum said the "expensive hardware" the military had put into action delivered a rapid victory in Iraq.

"What's that going to mean?" she asked.

"That's a very important and profound question," said Woodward, who spoke to CBC's The Journal from Los Angeles.

"I think one thing it means is that we may be quite willing to use the military again."

Pointing to the examples of Hussein in Iraq and Manuel Noriega in Panama, Woodward said the U.S. and its allies could intervene in similar cases in future — though he saw risks if that were to occur.

"There may be instances down the road when it won't work or where it will be not the right alternative, that we will unleash forces and attitudes that we can't even anticipate," said Woodward.

27 years ago
Duration 8:24
In July 1996, journalist Bob Woodward talks about his latest book, The Choice.

Shortly before the United States celebrated Independence Day in 1996, Woodward was on The National discussing his latest book.

It was an election year in the U.S., which tied into the timing and topic of The Choice, Woodward's look at the two candidates seeking the presidency — U.S. President Bill Clinton and Republican candidate Bob Dole.

The CBC's Brian Stewart said The Choice painted a picture of "two rivals utterly obsessed with power, but hard-pressed to define clearly what they stand for."

But Woodward said he believed both men were capable and hungry for the job.

"These are people who are — both Clinton and Dole — public servants from their toes to the top of their heads and they've committed their lives to it," said Woodward.

"In fact, I think I showed that these people have no other life. Politics is something they've lived morning, noon and night."