A weekend in Canada wasn't all fun for Margaret Thatcher

Margaret Thatcher's reluctance to join her Commonwealth colleagues in condemning apartheid in South Africa got her a chilly reception on a visit with Canadian prime minster Brian Mulroney. 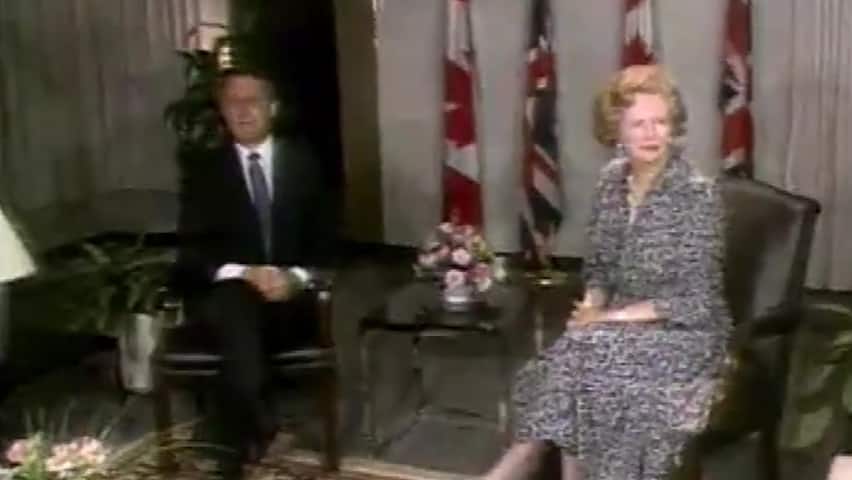 35 years agoVideo
2:42
The British Prime Minister's visit is notable for her stance against sanctions for apartheid South Africa. 2:42

The protesters were waiting when Margaret Thatcher got off the plane in Mirabel, Que.

The British prime minister had flown in from Vancouver on the Concorde supersonic jet after visiting Expo 86.

Her Mirabel host, Prime Minister Brian Mulroney, was in agreement with the protesters on their displeasure with Thatcher's stance on apartheid in South Africa.

Thatcher's "unbending" opposition to sanctions against South Africa was "threatening to break apart the Commonwealth," according to reporter David Halton.

Mulroney, who had already stood with other Commonwealth leaders in their resolve to pressure South Africa to end apartheid, was hoping to prevail on Thatcher to join their position at their next meeting.

"Sanctions now! Sanctions now!" chanted the demonstrators outside as the pair met for an hour at an airport hotel.

Inside, Mulroney tried to convince Thatcher to support the Commonwealth agreement on sanctions, which would end all imports of South African food and sever air links with the country, according to Halton.

"Afterwards ... the lack of progress was quickly evident," said Halton.

"I have not made any changes in my own position on South Africa," said Thatcher in a press conference.

Mulroney put it another way.

"There is a divergence of approaches, obviously, between the United Kingdom and Canada and others," he said in his own separate question-and-answer session.

Britain's approach, said Halton, had been to allow South Africa to gradually "set its own timetable for reform." But Mulroney came out hard against that idea.

"An evil regime has not changed in its fundamentals one bit," he said. "The cosmetics of change, the appearances of change from time to time. But the fundamentals have remained unaltered."

Halton said Mulroney had no illusions he'd be able to change Thatcher's mind. But there was another world leader to consider.

But he was apparently counting on the United States to soon change its own position on apartheid.

"The hope is that if the Commonwealth can't budge Margaret Thatcher, Ronald Reagan will," said Halton.