Some kids write about great inventions and move on. At 11, Rachel Zimmerman Brachman was busy with her own inventions.

Before she was even a teen, Rachel Zimmerman Brachman was in a class of her own

Welcome time travellers! Inspired by the missing journal pages in Murdoch Mysteries: Beyond Time, we're exploring what Canada might have been like without a few extraordinary citizens.

The Blissymbol printer opened up new worlds of communication for people with disabilities. It grew from a collision between a Holocaust survivor with grandiose dreams and a 12-year old Canadian girl who loved science.

For her Grade 6 science fair project, she came across a library book called Blissymbolics: Speaking Without Speech, by Elizabeth Helfman. It described a pictographic language of symbols being used by kids with cerebral palsy and other disabilities who had trouble speaking. That book inspired her to create a program for her Atari 400 computer that would introduce the public to Blissymbolics, and how they were used.

"I had to arrange to get electricity for my science fair project," she says, "and I brought it to school, and I showed people the symbols on the screen."

The next year, 1984, Zimmerman Brachman took the idea further. She adapted a touch-sensitive Atari tablet into a Blissymbol touchpad, and added a printer to allow users to print out what they wrote.

"The way Bliss was used traditionally, somebody had to be with you watching you point to the symbols. It was a very long, slow process," she recalls, adding that some people who can't speak also have poor motor control. "They know what they want to say but they don't have an easy way to say it."

But the creative young girl had a novel solution.

"I somehow made the connection that if you could put some of these symbols onto a touch tablet, the computer has infinite patience." 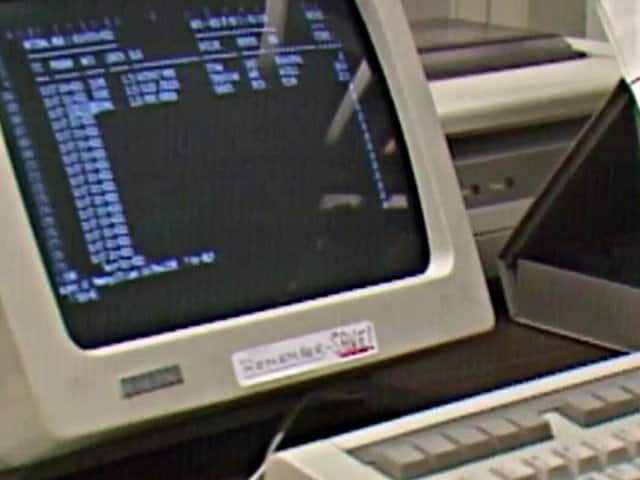 Digital Archives10:44Three teens discuss the role of computers in 1986 and in the future
Rachel Zimmerman, Jake Rich and Ben Vitale talk to CBC radio's Morningside about how they use computers and how they see them in the future.

This was not the future Charles Bliss had in mind at all when he invented Blissymbols, though.

Bliss was a Holocaust survivor, born to a poor Jewish family in 1897 in a corner of the Austro-Hungarian empire that is now part of Ukraine. After fleeing to Shanghai for refuge during World War II, he was inspired by Chinese characters to create a language of universal symbols that look like the ideas they represent. If everybody wrote in symbols that said plainly what they meant, he thought, people would see through demagogues like Nazi leaders when they twisted language around with lies and metaphors.

Bliss finished a book about his new system in 1949. But he was crushed when his idea was not immediately adopted.

Canadian teacher Shirley McNaughton found a reference to Blissymbolics in the late 1960s, when she was looking for language tools to help her students at the Ontario Crippled Children's Centre (now known as Holland Bloorview Kids Rehabilitation Hospital). Her team was looking for more language tools for non-verbal children with disabilities like cerebral palsy.

The kids she taught suddenly exploded with language and ideas. McNaughton found the Blissymbols were an excellent bridge for these children on the way to learning English. Initially, Bliss was overjoyed to find people using his ideas. But he hated the way they used them, threatening the centre with multiple lawsuits.

When Zimmerman Brachman encountered Blissymbols, they were not very accessible in classrooms.

At the time, she says, the only software available for people who used Blissymbols was on a system that cost $10,000. But the Atari system she designed only cost about $500, including a black-and-white TV monitor — affordable enough for school or home use.

The Blissymbol printer gained national attention, and Zimmerman Brachman was able to meet people like Kari Harrington whose internal lives were unlocked by Blissymbols. Harrington had cerebral palsy, and grew up to be a webmaster and a poet.

Blissymbolics are still used in Canada, Sweden, Israel and the United Kingdom.

Eventually, Zimmerman Brachman's research led her to study medical and rehabilitation applications of space technology. Today, she works at NASA's Jet Propulsion Laboratory in California, teaching the public about space exploration. She also serves as president of an organization called Science Education for Students With Disabilities.

Her goal today: "Trying to make sure the next generation, who loves space as much as I do, want to learn more about the missions that are going on right now."

Who knows how far they'll go?

Chris Chang-Yen Phillips is the Historian Laureate for the City of Edmonton and News Coordinator at CJSR 88.5 FM. He also produces a monthly history podcast called Let's Find Out where he asks Edmontonians for questions about local history, and then they find out the answers together.