Meet the Canadian engineer who casually invented the pacemaker

In an era when doctors and engineers didn't really collaborate, a well-timed request led to a medical breakthrough.

'I was naive enough to expect it to work.'

Welcome time travellers! Inspired by the missing journal pages in Murdoch Mysteries: Beyond Time, we're exploring what Canada might have been like without a few extraordinary citizens.

The dog's heart was empty, but still slowly pumping away, when it suddenly stopped beating.

So begins the story of the world's first artificial pacemaker.

It was 1949, and the research team at Toronto's Banting Institute was trying to see if "super-cooling" the bodies of dogs, and clamping off the veins draining into their hearts, would make it easier to perform open-heart surgery. They wrapped the dogs up in refrigerated blankets and injected them with pentathol and curare to stop them from shivering.

About half of the dogs were surviving the surgery and warming up again.

Dr. Wilfred G. Bigelow and his assistant Dr. John C. Callaghan were leading the lab's research, but fortuitously, the National Research Council in Ottawa had recently sent them a well-respected electrical engineer to work on temperature-related experiments.

His name was John Alexander Hopps, though he preferred to be called Jack. He was an essential ingredient in what happened next.

The story goes that when one particular dog's heart stopped beating, Dr. Bigelow decided to try something unusual to restart it. Doctors already knew that electrical pulses could help regulate a patient's breathing, but he decided to try using an electrical probe to zap a the dog's sinoatrial node. That node is also known as the heart's pacemaker, setting the rhythm of its beating.

Gradually, those little zaps brought the dog's heart back to a regular pulse.

It was an intriguing result. Bigelow and Callaghan asked Hopps to see if, applying the principle, he could develop a specialized machine for restoring a heartbeat.

The surgeons weren't the first to notice this effect, says Dick Bourgeois-Doyle, Secretary General of the National Research Council — but to take it to the next level, they needed "somebody with engineering and electrical science background, in the physics of electric currents."

"I actually think that's sort of the magic of the Canadian contribution to this enterprise, was that varied expertise."

Bigelow and Callaghan found this electrical engineer in their midst so likeable that they asked him to give it a go, and Bourgeois-Doyle thinks that played a surprisingly big role in the story.

"They knew Hopps, but if they didn't trust him and like him, they might not have taken that next step to engage him in this project."

Indeed, as Hopps himself told the CBC in 1984, "In those days there wasn't much rapport between engineering and medicine, and I think that was one of the real problems in our research. The medical people didn't know the potential of engineering to assist them. And we knew nothing at all about the medical problems."

In his mind, the task was an "ordinary engineering problem," and so he was not surprised when it worked. He didn't even register it as a breakthrough at the time.

"I was naive enough to expect it to work."

By 1950, John Hopps had helped develop a boxy machine that could insert a catheter through a vein and send an electric impulse to get a heart beating regularly again: the first practical artificial pacemaker-defibrillator.

At first, they were only using this shoebox-sized machine to restart hearts in the hypothermia experiments. But even then, their team saw the amazing potential if it could be shrunk down and left inside a patient's chest.

Before long, the invention of transistors and lithium batteries enabled others to develop the first implantable artificial pacemakers.

Many of the basic features in that first pacemaker are still around in modern devices, like its ability to be inserted through a vein to make the procedure more comfortable.

Back at the National Research Council, Hopps had an entire second career helping launch the field of biomedical engineering. His team's research helped pioneer the use of ultrasound for diagnosis and devices to help blind patients.

Hopps became the first president of the Canadian Medical and Biological Engineering Society, which has encouraged research into medical technologies we rely on every day, from MRI scanning to bionic limbs.

Without exaggeration, millions of people with artificial pacemakers in their chests have lived longer and more comfortable lives because of John Hopps' contributions.

He himself had one implanted in 1984, and a second in 1997, inspiring one of the most satisfying headlines ever written: "Canadian engineer left to his own devices." 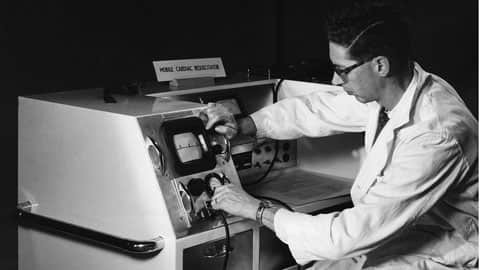 Chris Chang-Yen Phillips is the Historian Laureate for the City of Edmonton and News Coordinator at CJSR 88.5 FM. He also produces a monthly history podcast called Let's Find Out where he asks Edmontonians for questions about local history, and then they find out the answers together.